On this day in ...
... 1998 (10 years ago today), an uneasy truce continued to hold in Kosovo, amid warnings that fighting between Serbian forces and the Kosovo Liberation Army could resume if international ceasefire monitors withdrew. 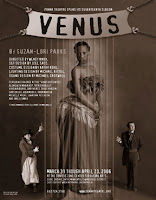 ... 1815, Sawtche, a Khoikhoi woman born around 1789 in what is now South Africa, died in Paris, France. As a slave she'd also had the name Saartjie Baartman. Because the posterior part of her body seemed unusually large, she had became an "object of curiosity among white colonizers," who bestowed upon her the ignominious nickname "Hottentot Venus." She was taken to Europe in 1810. "After having been immodestly 'studied' by naturalists from the Muséum national d'histoire naturelle," recounts the caption to this French caricature, she died "in the most severe misery." At her death she was 25 years old, and had

turned to prostitution when "scientific" interest in her waned. In 2002 her remains were returned to Cape Town; in the words of this article:

... Sarah Baartman is home, and has finally had her dignity restored by being buried where she belongs -- far away from where her race and gender were so cruelly exploited.

IntLawGrrls' guest/alumna Judith Weingarten's Zenobia blog post on Sawtche may be found here. The above poster is from Venus, a play about this woman, by Suzan-Lori Parks (right).