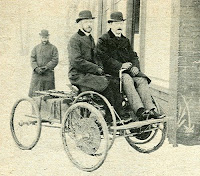 On this day in ...
... 1891, the United States' 1st electric car, dubbed the Electrobat, appeared. The 1st version was heavy and slow, but later models, like that at left, were lighter and able to go as fast as 20 mph. As all know, electric cars soon gave way to those powered by gas engines. Given the financial, environmental, and geopolitical

problems associated with oil extraction, perhaps this story is about to come full circle.
... 1919, Lincoln's Inn (coat of arms at right), 1 of London's 4 ancient lawyers' societies known as the Inns of Court, admitted its 1st woman bar student.