On this day in ...
... 1873 (135 years ago today), Willa Cather (right) was born in Back Creek Valley, Virginia, to a farming family that had ancestral roots in England, Ireland and Alsace. When she was 8 or 9 the family moved west, homesteading near Red Cloud, Nebraska. After graduation from the University of Nebraska, she worked as a newspaperwoman and began writing poetry and stories. Among her most noted works are My Ántonia (1918) and O Pioneers! (1913). Having won a Pulitzer Prize in 1923, in the 1930s she was ranked as 1 of the United States' 2 best novelists. Cather, who died in 1947, is best known "as a chronicler of the pioneer American West" whose stories evince grand themes such as "the universal story of the rise of civilizations in history" and "the drama of the immigrant in a new world."
... 1988 (20 years ago today), Palestine Liberation Organization Chairman Yasser Arafat (below left) issued the following statement respecting the PLO and Israel at a meeting in Stockholm, Sweden:

As its contribution to the search for a just and lasting peace in the Middle East, the Executive Committee of the Palestine Liberation Organization, assuming the role of the Provisional Government of the State of Palestine wishes to issue the following official statement: 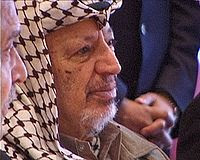 1. That it is prepared to negotiate with Israel within the framework of the International Conference a comprehensive peace settlement of the Arab-Israeli conflict on the basis of U.N. resolutions 242 and 338.
2. That it undertakes to live in peace with Israel and other neighbours and to respect their right to exist in peace within secure and internationally recognized borders, as will the democratic Palestinian State which it seeks to establish in the Palestinian occupied territories since 1967.
3. That it condemns individual, group and State terrorism in all its forms, and will not resort to it.