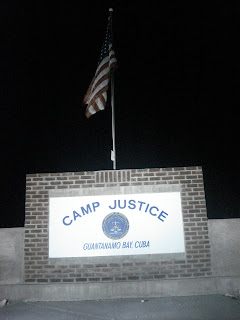 Seems everyone has notions these days about how to close the detention camp for terrorist suspects that the Bush Administration opened on January 11, 2002. Some are included in a report by a coalition of more than 20 organizations, entitled Liberty and Security: Recommendations for the Next Administration and Congress. IntLawGrrls’ own Fiona de Londras, in an excellent post, recently offered hers. I’ve my own, too, and will post them in due course. They begin with a pre-eminent concern, on which I posted more than a year ago. In closing Guantánamo as he has promised to do, the new President also must close “Guantánamo” – the abusive policies of detention, interrogation, and rendition now given that metaphoric label even if in point of fact they occur far away from the 45 square miles that comprise the U.S. naval base at Guantánamo Bay. (12/08 photo of Camp Justice, Guantánamo Bay, Cuba, by Diane Marie Amann)
Today’s post is intended to point readers to the Scholars’ Statement of Principles for the New President on U.S. Detention Policy: An Agenda for Change. Drafted by our colleague Catherine Powell, also author of a human rights Blueprint on which we’ve posted, and signed by more than 2 dozen other scholars, among them yours truly, IntLawGrrl Jenny Martinez, and our colleagues Fionnuala Ní Aoláin, Sarah H. Cleveland, Deborah Pearlstein, Hope Metcalf, Martha Minow, Judith Resnik, Margaret L. Satterthwaite, and Ruti Teitel. The Statement begins with an explication of how “the existing detention system,” -- “viewed as unprincipled, unreliable, and illegitimate” -- “undermines our national security.” It then sets forth 4 principles on which any new policy ought to be based:
► Observe the rule of law
► Liberty is the norm
► Individualized process
► Transparency
Then follows a host of recommendations for the new administration. As one would expect, it calls on the President to “Close Guantánamo” – to close it in the broader sense. Detainees who can be released are to be released; those should be prosecuted are to be transferred to the United States for prosecution before “established U.S. courts,” and not the military commissions. The Statement urges the Administration to attend to U.S. detention at other sites, “primarily in Iraq and Afghanistan.” It calls for an end to extraordinary rendition, and it admits no tolerance for abuse during detention or interrogation.
In short, the Statement's a document essential to thorough consideration of what to do to undo post-9/11 detention policies.