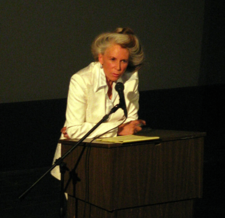 (In this post, guest blogger Amy Senier returns to the blog with an discussion of the recent appointment of a Special Advisor on Gender Crimes to the International Criminal Court)
A recent appointment by the Prosecutor of the International Criminal Court (ICC) promises a more focused strategy on the prosecution of gender-based violence at the supranational level. Last week, ICC Prosecutor Luis Moreno-Ocampo named Professor Catharine A MacKinnon as his Special Advisor on Gender Crimes. The appointment, announced on November 26, signals an intensified commitment on behalf of the Office of the Prosecutor (OTP) to address gender crimes, an area in which the Prosecutor has drawn mixed reviews for his response to cases and situations in the Democratic Republic of Congo and Central African Republic.
Professor MacKinnon has been at the forefront of feminist international legal thought for nearly 30 years. Her noted works include: Toward a Feminist Theory of the State (1989), Women's Lives, Men's Laws (2005) and Are Women Human?: And Other International Dialogues (2006). She is currently the Elizabeth A. Long Professor of Law at the University of Michigan Law School, where she teaches "Women's Human Rights," "Sexual Equality," and "Men, Women and Conflict." In 2000, Professor MacKinnon served as co-counsel in Kadic v. Karadzic, securing a $745 million damages award for Croat and Muslim rape survivors after successfully arguing that rape constitutes an act of genocide.
Professor MacKinnon's appointment is made pursuant to Article 42(9) of the Rome Statute, which authorizes the Prosecutor to appoint advisors "with legal expertise on specific issues, including, but not limited to, sexual and gender violence and violence against children." Under her new mandate, Professor MacKinnon will work closely with the Prosecutor and Deputy-Prosecutor Fatou Bensouda to "further develop the approach to Gender crimes" within the OTP. Professor MacKinnon is no stranger to the ICC. As recently as October 2008, she briefed the OTP on The Recognition of Rape as an Act of Genocide — Prosecutor v. Akeyesu." The appointment of a renowned scholar and practitioner such as Professor MacKinnon inspires hope of more consistent and proactive prosecutions of gender-based crimes at the ICC.