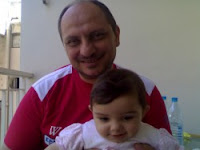 As many of us look forward to a new administration that will move away from the unlawful and immoral practices of rendition and torture, Naji Hamdan reminds us that we've yet to make a clean break from the torturers of Abu Ghraib, Guantanamo, and secret detention centers in unnamed locations. If his lawyers' allegations are true, Naji Hamdan holds the dubious distinction of being one of a few U.S. citizens known to have been detained and tortured abroad at the behest of his own government. Hamdan, pictured at left with his daugher Noor, was born in Lebanon and became a naturalized U.S. citizen after moving here to attend college on a scholarship. In 2006, Hamdan, his wife, and their three children, all of whom are U.S. citizens, moved to the United Arab Emirates primarily to avoid the drugs and other problems prevalent at the high school their son would soon attend in Los Angeles, but also due to Hamdan's frustration with the FBI scrutiny to which he'd been subject since 9/11.
On a return trip to the United States a few months later, Hamdan was placed under intense FBI surveillance. Then, early this year, Lebanese intelligence officers detained Hamdan at the Beirut airport, interrogating and physically abusing him. In early August 2008, two FBI agents who had flown in from Los Angeles interrogated Hamdan for several hours at the U.S. Embassy in Abu Dhabi. About three weeks later, U.A.E. State Security Forces took Hamdan from his home and held him incommunicado for three months. Despite tearful pleas from his wife (and subsequent evidence that U.S. Embassy officials were made aware of his detention the day it happened), U.S. consular officials didn't visit Hamdan in detention until mid-October. A month later, Hamdan's wife and brother filed a habeas corpus petition in D.C. court, claiming that the U.A.E. was holding Hamdan at the behest of the U.S. government.
Within a week, Hamdan was transferred from State Security custody to a prison in Abu

Dhabi, and was charged with terrorism-related offenses. Last week, Hamdan was finally allowed to call his brother from prison. His stories were horrifying; Hamdan's captors kept him in a freezing underground room, where they beat and tortured him. Not only was Hamdan denied medication for his liver condition, but his torturers specifically beat him in the location of his liver. Hamdan's torturers beat him on the soles of his feet, subjected him to sleep deprivation, and tortured him so severely that he often passed out from the pain.
Hamdan's wife and brother insist "that he's never had any terrorism involvement or been charged with any crime despite the longtime FBI scrutiny." His wife continues, "Naji hates war. He hates what happened on September 11. He hates terrorism." The case is eerily reminiscent of the U.S. government's treatment of Maher Arar, the Syrian-Canadian who was rendered from JFK Airport to Syria, where he was brutally tortured. We've posted about the Arar case here and I've written about it here; after a Canadian commission of inquiry found that Arar had no connection to terrorism, Condoleeza Rice admitted that the U.S. government "didn't handle his case as it should have been." For those of us who had hoped that our government had learned its lessons and cleaned up its act, the Hamdan case is a sad reminder of how far we have to go. And for Naji Hamdan and his family, the outrageously senseless violence that destroyed their sense of security in their home, faith in their government, and trust in humankind will stay with them forever.
by Jaya Ramji-Nogales at 7:00 AM