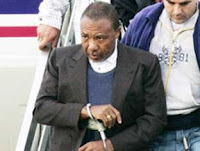 In focusing above on the Special Court for Sierra Leone case against Charles Taylor père, IntLawGrrls by no means intends to ignore the latest news respecting his son, Charles Emmanuel (right), also known as Chuckie Taylor. (photo credit)
As IntLawGrrls posted, back in October Emmanuel was convicted "for torture and conspiracy to commit torture, the first conviction ever under the U.S. statute providing for universal jurisdiction over acts of torture." (Additional post here.)
Just days ago, Miami-based U.S. District Judge Cecilia M. Altonaga delivered the sentence: 97 years behind bars.
As we've posted before, Emmanuel's case begs comparison with other torture allegations abrew in the United States -- earlier, with regard to claims of vagueness, and now with regard to sentence imposed.
by Diane Marie Amann at 6:02 AM