A Blow To Foreign Sovereign Immunity

The 4th Circuit recently issued an important ruling in an Alien Tort Statute ("ATS") case involving a Somalian defendant brought by the Center for Justice & Accountability. (map of Somalia to the right; credit)
In Yousuf v. Samantar, plaintiffs are suing Mohamed Ali Samantar (found living in Virginia) for alleged acts of torture and other human rights violations committed against them by government agents commanded by Samantar during the brutal regime of Mohamed Siad Barre. The district court concluded that Samantar should enjoy immunity under the Foreign Sovereign Immunities Act, and dismissed the action for lack of subject matter jurisdiction. The 4th Circuit, bucking a contrary jurisprudential trend, recently concluded that the FSIA does not apply to individuals and reinstated the case.
Historically, states were immune from suit, subject to the whims of the executive. As the Supreme Court stated in The Schooner Exchange v. McFadden (1812):

One sovereign being in no respect amenable to another; and being bound by obligations of the highest character not to degrade the dignity of his nation, by placing himself or its sovereign rights within the jurisdiction of another, can be supposed to enter a foreign territory only under an express license, or in the confidence that the immunities belonging to this independent sovereign station, though not expressly stipulated, are reserved by implication, and will be extended to him.

Later, an inclination toward restrictive immunity emerged that withheld immunity for private acts of the state (jure gestionis, i..e. acts that could be undertaken by a non-governmental entity) while maintaining immunity over its public acts (jure imperii, i.e., acts that could only be committed by a state).

In 1976, Congress enacted the FSIA in many respects to codify the doctrine of restrictive immunity and depoliticize determinations of sovereign immunity. The FSIA reaffirmed immunity as a default defense in litigation against states and their agencies or instrumentalities, subject to a series of exceptions. Enumerated exceptions include
► situations in which a foreign state has “waived its immunity either expressly or by implication,”
► cases in which “the action is based upon a commercial activity carried on in the United States,” and
► suits against a foreign state for “personal injury or death or damage to or loss of property, occurring in the United States and caused by the tortious act or omission of that foreign state or of any official or employee of that foreign state while acting within the scope of his office or employment.”

In these cases, the courts determined that only where an enumerated exception to immunity exists, or where the defendant acted in his or her “personal or private” capacity, may individual state actors be sued under the ATS (or its sibling, the Torture Victim Protection Act ("TVPA")). This construction of the interaction between the two statutes has the potential to effectively eviscerate the TVPA and much of the ATS, because satisfying any state action requirement inherent to the tort alleged (such as torture, which requires a showing of state action) might automatically trigger the applicability of the FSIA. This is notwithstanding that the TVPA was passed after the FSIA and should not be subordinated to it without explicit Congressional guidance to that effect. The Belhas court, and courts following its lead, also failed to recognize that acts of torture and other human rights abuses can never be within the “official” functions of a foreign official, even where such actions are putatively undertaken in the service of the policies or interests of the sovereign, because such acts are unlawful under international law.

In Samantar, the 4th Circuit joined the 7th Circuit in ruling that
► the plain text of the statute,
► the entire statutory scheme,
► the legislative history, and
► the FSIA's object and purpose 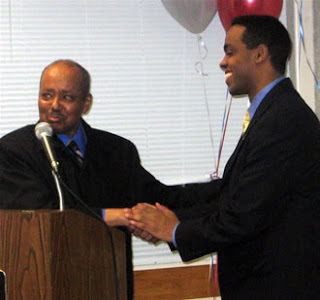 did not support the district court opinion. Citing Dole Food Co. v. Patrickson, 538 U.S. 480 (2003), the 4th Circuit also indicated, in what is essentially dicta, that in any case, the FSIA would not apply to former government officials, such as Samantar (shown on the left).
The case was thus remanded for further proceedings, which will likely include a consideration on whether the plaintiffs failed to exhaust local remedies or whether the case is time-barred.

Additional details on the case are available here. Defendant has apparently moved for rehearing en banc and has announced he'll also seek cert if he does not prevail on his appeal.

We are heartened by the decision in this case. With the failure of the ad hoc human rights courts in Indonesia to prosecute crimes against humanity and other human rights abuses committed by Indonesian state agents and their proxies during the illegal occupation of East Timor from 1975-1999, and the reluctance of the international criminal institutions to set up an international criminal tribunal, the only hope for justice appears to be for survivors of the Indonesian atrocities in East Timor to bring actions in national courts.

East Timor Law and Justice Bulletin advocates for the establishment of an international criminal tribunal to try perpetrators of crimes against humanity in East Timor and is sponsoring a petition to the UN Secretary General in this regard.

Please visit East Timor Law and Justice Bulletin and signify your support by signing the petition.