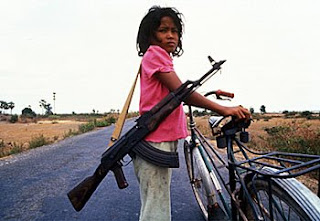 (My thanks to IntLawGrrls for this opportunity to contribute this guest post.)
Recently, organisations working with former child soldiers have observed the growing number of girls involved in armed conflicts.
While girls' fate as sexual slaves is well documented, their participation in hostilities is less acknowledged. Girls, like boys, spy, loot, and kill. But they also cook, clean, and run camps. International humanitarian law, human rights law and international criminal law clearly proscribe “using [children] to participate actively in hostilities.” Three key issues are raised in this context:
► the definition of a child;
►the interpretation of the expression “participation in hostilities”; and
►the use of the word “actively/direct” to qualify the type of participation.
While the first issue is rather generic, since it aims at ascertaining who is a child, the second and the third appear gender-biased. Indeed, the expression “direct participation in hostilities” assumes that child soldiers are boys engaged in combat duties. This interpretation leaves open the possibility that the activities carried out by girls do not fall within the purview of this prohibition. As a result one may even question whether the recruiters of girls are breaching legal norms by “using” them.
It is this gap that triggered my interest in the subject. I have recently published an article, Girl Soldiers and Participation in Hostilities, 16 African Journal of International & Comparative Law 219 (2008). There I argue that the actual participation of boys in armed conflict does concur strictly with the legal definition of direct/active participation. But this does not always hold true for girls, since they are involved in a plethora of activities that are related to military operations but whose purpose is not necessarily “to cause harm to the personnel or equipment of the enemy forces.” However, I contend that a broad interpretation of the word “direct” allows for the inclusion of most girls’ activities within the prohibitive provisions. Moreover, I argue that as girls are more likely to make an indirect contribution towards the hostilities, it is important that indirect participation be also prohibited. Unfortunately, only an overtly broad interpretation of the text can lead to such a conclusion. As a result, the case of girl soldiers reveals how inopportune and counterproductive the legal distinction between direct and indirect participation in hostilities is.
Strictly speaking, one must examine on a case-by-case basis what was the focus of girls’ activities in order to qualify their participation in the conflict. This involves interviewing a substantial number of girls, obtaining factual evidence of their activities and assessing the time spent on each task. Further, an objective test may fail to take into consideration the feelings of the girls who perhaps viewed the situation from a different angle.

Regrettably, I come to the conclusion that it is unlikely that those accused of using children to participate in hostilities can be successfully prosecuted for obliging girls to take part in the conflict unless these girls were almost exclusively “used” for activities closely related to military operations.
This is an area of the law that urgently needs to be addressed.