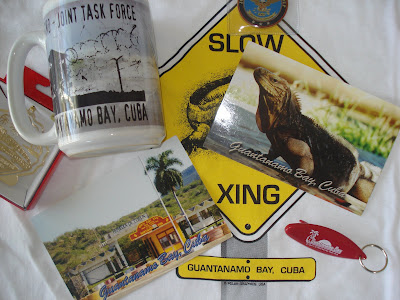 The world waits to see if detention at Guantánamo will end once Barack Obama takes the Presidential oath at high noon tomorrow. Media are rife with queries and commentaries on same -- among them IntLawGrrls' prior Guantánamo posts and a couple that I wrote last week here and here. This post offers my own glimpses of the naval base as it has been post-9/11 and, for at least a few days more, still is.
At this writing I imagine that a new crew of reporters, lawyers, and NGO observers has crossed choppy water in vessels called "vipers" -- envision very sleek, very fast versions of the boat in the movie "The African Queen" -- to "Camp Justice." Why? Today's pretrial hearing in the case of Omar Khadr, the best-known among the alleged-child-soldier cases

pending before GTMO military commissions. Trial of the Canadian-born Khadr, 15 at arrest (right) and now 22, is set for next Monday. (Carol J. Williams' excellent Los Angeles Times article on the law of Khadr's case is here.)
Camp Justice is the name given to a cluster of quonset-like tents (below left) and tiny trailers. It's situated on the tarmac of an abandoned airfield on the windward side of a base that sprawls for 45 square miles, twice the size of Manhattan. This cluster stands next to the walls and razor wire surrounding a new and hypersecure court complex. On a hill sits a much older courthouse. Farther away lie camps that, as of Saturday, still hold 244 noncitizens seized as terrorism suspects. Farther yet is the compound of cages into which the 1st detainees were put. Now closed, that Camp X-Ray compound crumbles beneath creeping vines, yet remains intact by order of a U.S. court that's hearing challenges to detention.
Camp Justice is the place wh 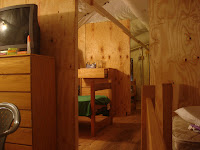 ere last month another such crew -- among them myself, observing on behalf of the National Institute of Military Justice -- was installed. We were there for proceedings in Khadr, which took place in the hilltop courthouse, and, in the new courtroom, in Khalid Sheikh Mohammed et al., the 9/11 case about which I wrote here.
Ever escorted, on occasion we NGO observers ventured elsewhere on the base. There's the outdoor Starbucks, the Subway nestled next to the NEX, or Navy Exchange, a supermarket that offers most of the foods and otherstuffs found at any neighborhood SuperTarget, and, at night, a dim room lined with barstools and booths that bills itself "the only Irish pub on Communist soil." No off-base adventures, neither for us nor for anyone but the 3 aging men who for a half-century have done the daily commute to and from homes in Cuba to work at GTMO. On account of the border, or "fence line," that separates the U.S. base from the rest of Cuban soil, GTMO's isolation is palpable.
It is an otherworldly place, where a beautiful natural landscape has given way both to the banality of government-issue structures and the brutality that the government itself admits occurred within prison walls. Eerily unfamiliar are elsewhere-familiar offerings like premium coffee. Odder still is GTMO kitsch, T-shirts, toys, and trinkets like those at top. It's the kind of stuff found in any souvenir shop anywhere -- even, oddly, in the few such shops scattered about this near-yet-far outpost of U.S. power. 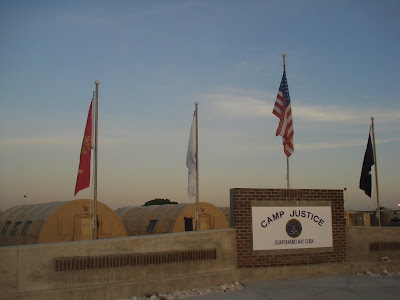