On January 22, 2009 -- exactly 7 years and 11 days after the first detainee was brought to Guantánamo -- President Barack Obama signed an Executive Order which requires the closure of the Guantánamo Detention Center within one year. The Order also:
► Calls for the participation of the heads of several agencies to cooperate in reviewing every detainee's case on an individual basis to determine whether the detainee can be released, transferred, or prosecuted pursuant to an Article III court.
► Allows for the determination of an "other disposition"; that is:

With respect to any individuals currently detained at Guantánamo whose
disposition is not achieved [by release, transfer or prosecution], the Review shall select lawful means, consistent with the national security and foreign policy intersts of the United States and the interests of justice, for the disposition of such individuals.

► Specifically calls for "humane standards of confinement" under applicable law, including Common Article 3 of the Geneva Conventions, for the individuals detained at Guantánamo.
In anticipation of the Executive Order, on January 21, Judge Reggie B. Walton of the U.S. District Court for the District of Columbia stayed the habeas proceedings in the case of three Guantánamo detainees who are before him. Walton did so at the request of the Government, which had stated that it needed time to figure out how to proceed.
Other district court judges with detainee habeas proceedings, however, are moving forward. 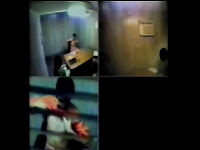 On the same day the Executive Order was issued, Judge John D. Bates invited the new administration to revise the government's position regarding the appropriate defintion of "enemy combatant" to be used in the habeas proceedings and, in another case, ordered the government to state whether it had audio or video recordings, or transcripts of statements made by the detainee, or contemporaneous notes taken during interrogations. (At left, images from the interrogation of Omar Khadr.)
Similarly, Judge Gladys Kessler gave both petitioner and the government a January 29th deadline for their submissions on the definition of "enemy combatant." In another habeas case, Kessler ordered discovery to proceed with certain disclosures from the government due on February 6.

(More on effects of the President's order below.)

Looks like the man is serious; a good start but needs caution. "Enemy combatant" ... hmmm! That is a slippery, sticky thing to define given the current form and content of "belligerency". I hope the people charged with defining it be responsible in thier approach because often times such people set the tone [direction], and if the court/s accept thier definition, other domestic and international jurisdictions will tend to follow suit. i pray the definition does not strip IHL of its HUMANITY.
ISAIAS YEMANE