It's IntLawGrrls' great pleasure to welcome L. Song Richardson (right) as today's guest blogger.
A specialist in criminal law, criminal procedure, and prosecutorial ethics, Song is an Assistant Professor at DePaul University College of Law, and this semester she's a visiting professor at Boston College Law School. Song earned her J.D. from Yale Law School, where she was on the board of the Yale Journal of International Law, and her B.A. in psychology from Harvard College. While at Harvard she earned distinction for her classical piano performances, which included performances with the Boston Symphony Orchestra. Before entering academia, Song was a Skadden Arps Public Interest Fellow with the National Immigration Law Center, assistant counsel at the NAACP Legal Defense and Educational Fund, Inc. As a state and federal public defender and private practitioner of criminal defense, she represented defendants in numerous white collar, serious felony, and capital cases. That expertise is evident in Song's guest post below, which exposes a defect in foreign evidence-gathering mechanisms and proposes a solution to the problem.
Song dedicates her post to Shirley Anita St. Hill Chisholm (1924-2005) who, as Song writes,

in 1968, became the first African American woman elected to serve in the U.S. House of Representatives. She became an international figure as a vocal critic of the war in Vietnam and, throughout her career, tirelessly championed numerous issues including civil rights, women’s rights and the rights of the urban poor.

In addition, as prior IntLawGrrls posts have noted, Chisholm ran for the highest office in the United States. In her most concerted campaign she entered several Presidential primaries (below left), and received 151.95 delegate votes at the 1972 Democratic National Convention. In 1984 Chisholm was trounced in a bid for the Democratic nomination for Vice President by another woman, Geraldine A. Ferraro. Chisholm was not the 1st African American person nominated for President at a major-party convention. As we've posted, that milestone was reached in 1888 by Frederick Douglass, who'd also run for Vice President in 1872 on a minor-party ticket headed by a woman, Presidential candidate Victoria Claflin Woodhull. Nor was Chisholm the 1st woman nominated for President at a major-party convention; as we've also posted, 8 years earlier Margaret Chase Smith had made an unsuccessful bid for the Republican Presidential nod. Nonetheless, the placement in 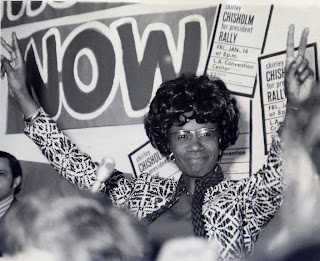 IntLawGrrls' foremothers list at right of this 1st African American woman to have her name placed in nomination is especially apt on this day of the inauguration of Barack Obama as the 44th President of the United States.
Heartfelt welcome!
by Diane Marie Amann at 7:02 AM