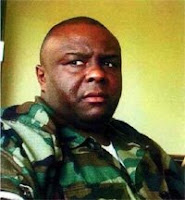 Just before New Year's Day, Pre-Trial Chamber III of the the International Criminal Court announced that the confirmation of charges hearing in the case of Prosecutor v. Jean-Pierre Bemba Gombo will be held Monday to Thursday of next week.
The charges arise from the investigation of the situation in the Central African Republic, which was begun by the ICC’s Office of the Prosecutor in January 2005 and on which IntLawGrrls previously posted here. Bemba (above left), an “alleged national” of the Democratic Republic of Congo, was seized pursuant to a May 23, 2008 arrest warrant charging that he was involved in war crimes and crimes against humanity within the territory of the Central African Republic. The latter, conflict-ridden country had referred the situation, for a period from July 1, 2002, onward to the international court in 2005, on the ground that its courts lacked the capacity to prosecute. (photo credit)
Bemba is the first case to arise from this referral. Bemba had formed the Mouvement de Libération du Congo, or MLC, in 1998 as a party to the civil war that raged in the DRC between 1998 and 2003. In 2002, Ange-Félix Patassé, then the President of the Central African Republic (now, in exile in Togo, ever since a 2003 coup), asked for Bemba’s assistance in quashing a rebel movement. While the MLC was active in the Central African Republic -- between October 25, 2003, and March 15, 2003 -- Bemba is alleged by the ICC Prosecutor to have orchestrated the Mouvement's campaign of rape, torture, pillage and outrages upon personal dignity in the localité of PK12 as well as the towns of Bossangoa and Mongoumba.

After losing his bid to become President of the Democratic Republic of Congo in 2006, Bemba served as senator until January 2007, when he was escorted by U.N. forces to Portugal, ostensibly for “health reasons.” Six months later, the DRC issued an arrest warrant charged him with high treason. On May 24, 2008, Belgian police arrested Bemba outside of Brussel pursuant to the ICC’s arrest warrant. Having been placed in custody, Bemba first appeared before Pre-Trial Chamber III on the U.S. Independence Day, July 4, 2008.
(Next in this 3-part preview series: A roadmap to this week's hearing on confirmation of charges)