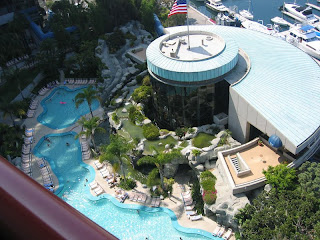 I scan the program for the meager portions of international law that are served each year. This year is no different, and it is safe to say that one morning at the ASIL annual meeting is more fruitful for the international scholar than four days at AALS.*

Notwithstanding that note of pessimism, in the post our colleague Roger Alford proceeded to give some positive answers to his own question. On these latter he and I are in much agreement. Attending the annual meeting of the Association of American Law Schools last week at the San Diego Marriott (above right) offered a[n over]view -- in a literal as well as a figurative sense -- of the entire legal academy. That can be of use to all us international lawyers in this era of [over]specialization. And a look beyond labels, to the actual content of the program, showed there was much on offer.
Case in point:
I was lucky enough to attend a superb panel cosponsored by the Section on Constitutional Law and the Section on Africa. Entitled "Socio-Economic Rights: Comparative Perspectives and Criticisms," it featured a spirited discussion by Penelope Andrews (Valparaiso) (prior post), Richard A. Epstein (Chicago), Mark S. Kende (Drake), and Kim Lane Scheppele (Princeton), moderated by Miguel Schor (Suffolk). The exchange revealed that the once-deep division of opinion on such rights may be lessening -- that there may be a convergence to some middle ground, even as some judges in some national systems begin to implement modest enforcement of those rights. The overall effect of this development remains unclear. The discussion suggested, as Kende put it most provocatively:

Socioeconomic rights cases have not changed macroeconomic policies in the countries that have them. This debate might not much matter.

Neither of the sponsoring sections has the word "international" in its name. Nonetheless, as this précis makes evident, the panel offered much of interest for many an international lawyer. (Aside: The panel that the Section on Africa sponsored last year was equally pertinent and interesting.) Same too with a session at the same time on California's Proposition 8, a matter of great interest to IntLawGrrls (prior posts may be found here) and others concerned about human rights at home.
To talk only about programming, however, is to overlook AALS's key role in professional development. For many of us, presenting at an AALS meeting marked an early foray into public speaking about our scholarship. For many of us, AALS has offered an opportunity to network, to build a professional profile that extends beyond our home institution, to develop leadership skills applicable not only to AALS but to all our professional endeavors. Those offerings are important for internationalists no less than other law professors.
And so it gives great pleasure to announce, in sequential posts below, IntLawGrrls' contributions to last week's meeting and the new leadership of the AALS Section of International Law, for which yours truly has the honor to serve as Chair in 2009-2010.

Heartfelt kudos to all!

* This passage indicates there may be another source for Roger's discomfort. Might it be that the question to ponder is not whether a particular 4-day conference affords enough benefit to international law professors, but rather whether, in many instances in our 24/7 Century, there's enough benefit in conferences that span 4 days, or more (to which transcontinentals must add a day or 2 for travel)?