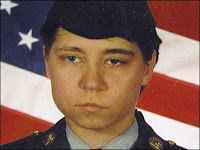 She says her mother once hit her so hard with a table tennis bat that it broke, but considers that normal for West Virginia.

-- account of an interview with Lynndie England (right), a onetime U.S. Army private and 1 of the very few persons held criminally responsible for the detainee abuse, about which I've written here, at Iraq's Abu Ghraib prison. Journalist Emma Brockes reports for Britain's Guardian that England, now 26, was released from military prison about 2 years ago, after having served 1/2 of her 3-year sentence. She's back home, living in a trailer, looking unsuccessfully for a job, and bringing up the son with whom she was pregnant during the military proceedings.