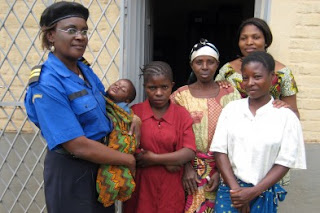 'The woman is the mother of a nation. He who rapes a woman rapes an entire nation.'

-- Major Honorine Munyole of the National Police of the Democratic Republic of Congo, described here as "a one-woman Special Victims Unit investigating sex crimes." Munyole's comment appears in the film that IntLawGrrl Lucy Reed reviews above. (credit for photo of Munyole, far left, with rape survivors and counselor at Centre Olame Bukavu, DRC)