A simple primer on the state of the world: women do most of the good stuff and get most of the bad. No whine, just fact. 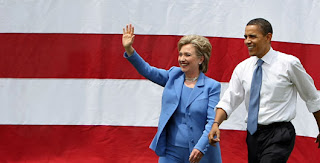 They harvest food and raise children, tend to the aged and the ill. Yet according to the Global Fund for Women, two thirds of the world's uneducated children are girls, and, naturally, two thirds of the world's poorest people are female. Not coincidentally, women make up only about 16 percent of parliament members worldwide. Simple mathematics dictates that if we are interested in promoting prosperity, education and good government, the United States must focus on the welfare of women.

-- Newsweek contributing editor Anna Quindlen (left), in a column celebrating the newly sworn-in Secretary of State, Hillary Clinton, and the President, Barack Obama (above right), as a team that can pursue a goal of the women's conference held in 1995 in Beijing: "for nations to prosper" by "pay[ing] attention to women's rights, women's welfare and women's concerns."
by Diane Marie Amann at 1:52 PM