... 1984 (25 years ago today), full diplomatic relations were re-established between the United States and the Holy See. Relations between America and the Vatican had broken in 1867. Representing the United States at the Vatican since last February (but expected to depart with the Bush Administration) is Ambassador Mary Ann Glendon (above at far right, with Pope Benedict XVI), whose work as a Harvard law professor included authorship of A World Made New: Eleanor Roosevelt and the Universal Declaration of Human 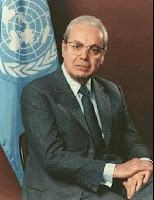 ... 1991, Javier Pérez de Cuéllar (left), who'd been U.N. Secretary-General since 1982, prepared to head to Baghdad, the BBC reported, "in a final diplomatic effort to avoid war against Iraq," by "rais[ing] the possibility of sending a UN peacekeeping force to Kuwait to oversee the peaceful withdrawal of Iraqi troops. " His efforts would fail, and military intervention, dubbed "Operation Desert Storm," would begin on January 16.