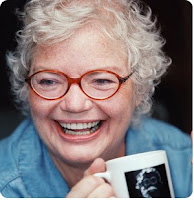 On this day in ...
... 2007, Molly Ivins (right) published a column entitled Stand Up Against the Surge, in which she urged readers to work to stop the Iraq War (which, in her view, the United States already had lost) by, among other things, taking part in a Washington peace march set for January 27. It would be her last column: the day before that scheduled march, the fiery, Texas-based political commentator, who'd been battling breast cancer since 1999, was admitted to hospital in Austin. She died on January 31, 2007, at age 64.

... 1909 (100 years ago today), in Washington, U.S. Secretary of State Elihu Root (then also serving as the 1st President of the American Society of International Law; 3 years later to win the Nobel Peace Prize) and British Ambassador James Bryce signed a treaty establishing mechanisms for pacific settlement of disputes involving waters, and water quantity and quality, at the U.S.-Canada border. The Boundary Waters Treaty is administered by an International Joint Commission, today comprising 5 men and 1 woman -- the latter is Irene B. Brooks (left), U.S. Section Chair.