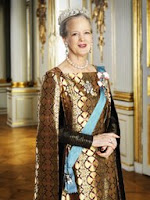 ... 1972, the woman born Margrethe Alexandrine Þórhildur Ingrid (prior post) ascended the throne to become Queen Margrethe II of Denmark (left). Despite the "II," it had been quite a while since a Danish monarch bore her name. Indeed, none had been named anything other than Frederik or Christian since 1513 (for good measure, her son, the Crown Prince, is named Frederik André Henrik Christian) -- and none had been a woman since the death in 1412 of Margrethe I, regent and the current queen's namesake. (photo credit)

... 1994 (15 years ago today), in Moscow, U.S. President Bill Clinton, Russian President Boris Yeltsin, and Ukrainian President Leonid Kravchuk signed a Trilateral Statement and Annex. The agreement included U.S. promises to aid the latter 2 countires, as well as promises by all 3 to continue to work to reduce nuclear arsenals, in part by deactivating nuclear warheads in Ukraine (right).