... 1954 (55 years ago today), Susan Mary Kiefel (right) was born in Cairns, Queensland, Australia, "into a family with no academic background." After leaving school at age 15, Kiefel embarked on a secretarial career. She began studying law while a legal secretary, and eventually became a barrister and Cambridge honors graduate, winning a prize in comparative law. Queensland's 1st woman QC, or Queen's Counsel, she served on various commissions and as a judge. Since September 2007 Kiefel has served as a Justice on Australia's High Court. Along with Justice Susan Maree Crennan, she's 1 of 2 women on the 7-member bench. 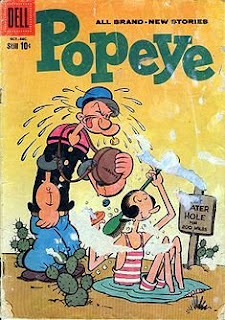 ... 1929 (80 years ago today), a scrawny sailor with immense forearms, named Popeye, made his cartoon début. Asked "Are you a sailor?" in that 1st strip, he replied with the "duh" of the day: "D'ja think I'm a cowboy?" As of the 1st of this year, as reported in London and Paris, European copyright on the comic expired -- so expect to see a lot more of Popeye and his friends over there. Among the cast is Popeye's girlfriend, the "coy flapper" Olive Oyl, who was a 10-year veteran of the comics by the time he appeared, and with whom he's pictured, courtesy of a Dell Comics cover, at left.