On this day in ...
... 1937, President Franklin D. Roosevelt became the 1st person to be sworn in as President on January 20. All Presidents were sworn in on March 4 -- a very long 4 months after the date on which they'd been elected -- until the passage of the 20th Amendment to the Constitution in 1933. The change marked the 2d of what would be 4 inaugurations for FDR. Today, of course, is the inauguration of President Barack Obama (left).
... 2002, the BBC reported the following about photos like that at right, released by the U.S. government, made at the detention center for terrorist 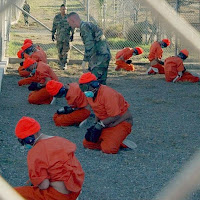 suspects that the United States had opened fewer than 3 weeks earlier at its naval base at Guantánamo Bay, Cuba:

The publication of photographs of prisoners being held at a US military camp in Cuba has led to concern that their human rights are being abused.

The man to be inaugurated as President today, Barack Obama, has pledged to close GTMO. We await further word.
by Diane Marie Amann at 12:00 AM