On this day in ...
... 1690, 80 sachems, or Native American leaders, met at Onondaga, in what is now upstate New York, and ratified a treaty of peace with the British and against the French. (credit for photo of Onondaga Lake) 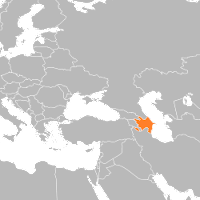 ... 1990, Soviet President Mikhail Gorbachev went on television and stated that "he had no choice but to order his troops" to enter Baku, the capital of Azerbaijan, in order, in the words of the BBC, "to try and end the undeclared conflict between Muslim Azeris and Christian Armenians, and put down a separatist insurrection by Azerbaijani nationalists." As many as 60 persons already had died since the tanks arrived. Azerbaijan, in orange at right, gained independence a year later; ethnic unrest lingers.