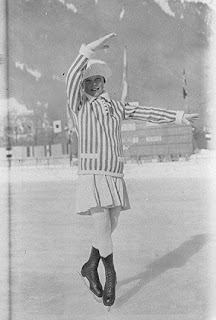 ... 1924 (85 years ago today), the opening ceremony of the 1st-ever Winter Olympics took place in Chamonix, France. The Games -- featuring 291 athletes, from 16 countries, competing in 16 events in 9 sports -- would run from January 26 to February 4. Of the 291 athletes only 13 were women. (IntLawGrrls' prior posts on women Olympians are here and here.) Among them was the Games' youngest competitor, 11-year-old Sonja Henie (right) of Norway, who placed last that year but "would later become the greatest women’s figure skater ever," not to mention a highly paid Hollywood star. Henie was also an all-time favorite of this IntLawGrrl's mother. 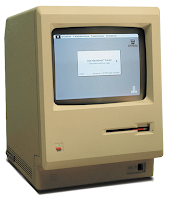 ... 1984 (25 years ago today), Apple introduced the Macintosh computer, "starting the second major revolution in the personal computer industry." This was in part because this original Mac (left) in part because it came with a device designed to aid user navigation of cyberspace: the mouse. Nostalgic MacHeads can see video of the rollout here. (photo credit)