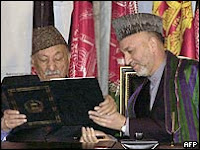 ... 2004, "in a ceremony at the foreign ministry in Kabul in front of ministers, ambassadors and military officers," Hamid Karzai signed the new Constitution of Afghanistan, to which a loya jirga, an assembly of regional representatives, ad agreed earlier in the month. Karzai then headed the transitional government in post-Taliban Afghanistan. He would be elected President in October 2004. (credit for photo of Karzai, far right, with former king Zahir Shah)

... 1973, the Convention for the Suppression of Unlawful Acts against the Safety of Civil Aviation, often called the Montreal Convention in recognition of the city where it was signed in 1971, entered into force. Today this antiterrorism convention has 187 states parties, including the United States.
by Diane Marie Amann at 6:01 AM

Labels: Afghanistan, aviation, Convention for the Suppression of Unlawful Acts Against the Safety of Civil Aviation, DMA, Hamid Karzai