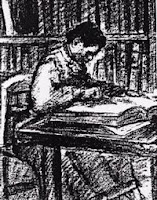 On this day in ...
... 1911, Charlotte E. Ray died on Long Island 60 years after her birth in New York City. The daughter of an abolitionist pastor/publisher, her ancestors included Africans, Native Americans, and Europeans. After graduating Phi Beta Kappa from the then-brand-new Howard University, in 1872 she became "the first African American woman lawyer in the United States and first woman admitted to the bar in the District of Columbia." She was active in the suffrage and civil rights organizations of the times, but found that "public prejudice" made it difficult to maintain a law practice, and so eventually returned to her 1st career, teaching. Last year Kareem Abdul Jabbar honored Ray with this blog post. (credit for drawing of Ray at left)
... 1717, England, France, and the Netherlands joined together in a Triple Alliance aimed at guaranteeing the Peace of Utrecht, the succession of treaties concluded earlier in the same decade that together established a balance of power in Europe.