On this day in ...
... 1950, Britain announced that it would extend official recognition to the People's Republic of China -- in the words of the New York Times, to "the Chinese Communist regime of Mao Tze-tung." The

Republic of China -- the Nationalist regime in exile on the island then called Formosa, and now, Taiwan -- objected, and the United States remained silent.
... 1919 (90 years ago today), in Berlin, Germany, a Revolutionary Committee, "the representative of the revolutionary socialist 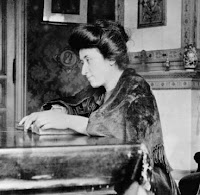 workers and soldiers," adjudged the government in power to have "rendered itself impossible," and thus declared it "deposed." This Spartacist Manifesto called upon "Comrades" and "Workers" to support a general strike. The uprising would last for a week; soon after its leaders, among them Rosa Luxemburg (right), would be arrested and killed.