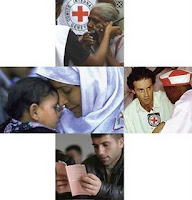 This week, my institution, Santa Clara University School of Law, is hosting our third International Humanitarian Law (IHL) Workshop with the International Committee of the Red Cross. Details here. The workshop, which is open to second- and third-year law students, features lectures and hands-on workshops led by members of the ICRC, current and former members of the Judge Advocates General Corps, and law faculty (including yours truly).
The topics are timely and include discussion of:

► When IHL Applies
► Conflict Classification
► Targeting and Limitations on the Means & Methods of Warfare
► The Regimes Governing Protected Persons
► Internment and Detention, with a Case Study on Current Detention Ops in Iraq
► Non-State Actors and IHL
► Direct Participation in Hostilities
► Implementation and Enforcement

The session on Direct Participation in Hostilities will feature the ICRC's most current thinking on this thorny topic, which has been the subject of ongoing discussions between the ICRC and the T.M.C. Asser Institute in the Netherlands.

The Workshop will culminates in a negotiation/role-play exercise, in which students, representing various nation-states, will be tasked with drafting a statute for a (fictitious)permanent international tribunal to prosecute crimes of terrorism. Students must grapple with

► defining the crimes within the court's jurisdiction;
► reaching consensus on whether to address domestic as well as international terrorism;
► theorizing the interface between crimes of terrorism and IHL;
► establishing the relationship between proceedings before domestic courts and the jurisdiction of the proposed international tribunal; and
► agreeing upon punishable forms of participation.

The Workshop is held annually, and our Center for Global Law & Policy accepts applications beginning in September. Interested law students are encouraged to apply next year. The Workshop is free, and the ICRC awards a certificate upon completion. Many law schools sponsor select students to attend to help defray the costs of travel and lodging.

sounds great. thanks for sharing