Toward parity in foreign evidence gathering

Many thanks to IntLawGrrls for inviting me to contribute this guest post on my article recently published in the Berkeley Journal of International Law, entitled “Convicting the Innocent in Transnational Criminal Cases: A Comparative Institutional Analysis Approach to the Problem.” The article examines how the fair adjudication of transnational criminal cases in the United States is negatively affected by Mutual Legal Assistance Treaties, typically called MLATs.
MLATs are bilateral treaties negotiated by the United States -- treaties that require foreign nations to provide U.S. prosecutors with evidence located within their jurisdictions upon U.S. government request. When it negotiated the treaties, the United States included language that explicitly prevents defendants from obtaining foreign evidence under the treaties. Thus, MLATs create transnational compulsory process solely for prosecutors. 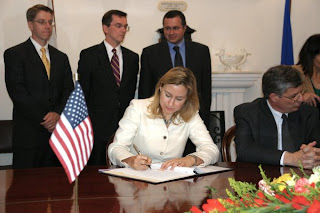 Inequities in evidence-gathering capabilities affect the accuracy of criminal trials. Without parity in compulsory process accuracy and fairness norms -- norms like punishing the guilty and freeing the innocent -- can be illusory.
Resolution of this disparity in foreign evidence gathering is difficult in light of Congress' relative indifference and the lasting reverberations of the terrorist attacks of September 11, 2001. Nonetheless, the danger of inaccurate verdicts and wrongful convictions that may result highlights the need to resolve this flawed transnational adjudication process -- specifically, its evidentiary method. Failure to do so results in cognizable deprivations to our system of criminal justice in general and to defendants in particular.
In the article, I utilize a comparative institutional analysis framework to identify the domestic institution best suited to achieve the norm of parity in transnational cases. When I began the project, I believed that a strong right to compulsion parity would best protect the twin goals of accuracy and fairness in transnational criminal adjudications. However, applying the framework revealed a potentially counterintuitive, negative result from this seemingly attractive option. Strong compulsory process rights could undermine accuracy norms, because under that approach, the executive would be forced to renegotiate existing MLATs to include explicit compulsion parity between defendants and prosecutors. If foreign nations objected, however, the parties would be left to rely upon the evidence-gathering market that had existed prior to MLATs. This market provided neither side reliable access to material and relevant evidence from foreign nations.
Surprisingly, then, provision of a strong right to compulsory process could make prosecution of the guilty more difficult and thus increase the risk that an innocent person would be wrongfully convicted.
Ultimately I conclude that a moderate right to compulsion parity would provide the best solution to remedy the compulsion disparity in transnational evidence gathering. Under this approach, courts would make case-by-case determinations on whether to order the government to request defense evidence utilizing an MLAT. A moderate right would leave MLATs intact, thereby avoiding serious foreign policy concerns, and it also would provide the best safeguard for protecting the innocent and convicting the guilty in transnational criminal cases. My hope is that courts will adopt the moderate rights approach, a framework for which I've set out in “Due Process for the Global Crime Age: A Proposal,” recently published in the Cornell International Law Journal.
(credit for May 2006 photo of ceremony in which Molly Bordonaro, then U.S. Ambassador to Malta, and Charles Deguara, Malta's Permanent Secretary of the Ministry of Justice and Home Affairs, signed the U.S.-Malta MLAT, which the U.S. Senate approved this past September)