A Tribute to Helen Suzman 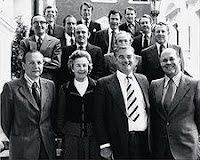 Helen Suzman, a lion of the anti-apartheid movement, died peacefully at her home in Johannesburg yesterday at the age of 91. South Africa's flags will fly at half-mast on Sunday to mourn her passing, a fitting tribute to an "indomitable" and "stroppy" "powerhouse against apartheid", in the words of Desmond Tutu and Nelson Mandela. Suzman, a member of South Africa's Parliament from the wealthy Johannesburg district of Houghton from 1953 until 1989, used her position to fight tirelessly against apartheid, often as a sole dissenting voice -- the "cricket in the thorn tree", as she was known. She served thirteen years as the sole liberal MP, six of those as the only female amongst 165 male MPs. Despite these daunting circumstances, Suzman continually stood up for justice and equality:

Helen's reputation was built not on lofty thoughts and resounding speeches, but on hard work. One by one, as they came off the assembly line, she shredded the bills that removed civil liberties. One by one, she tore her parliamentary colleagues apart for their callousness, ignorance and ineptitude. Day after day, she would meet the poor, either in her office, or more often in their own shacks, listening to their tales of sorrow and sadness, of hurt and hatred.

With typical chutzpah, she would accost ministers in the parliamentary lobby or beard police officers in their dens, and demand to know why some nameless person of colour was being deprived of his or her rights.

In Suzman's own words, "I am provocative, and I admit this. It isn't as if I'm only on the receiving end, a poor, frail little creature. I can be thoroughly nasty when I get going, and I don't pull my punches." The world will be a poorer place without those punches, though Suzman's fighting spirit will continue to inspire us to speak out against injustice and agitate for change.