(Go On! is an occasional item on symposia of interest) Throughout IntLawGrrls' 1st 2 years, occasions have presented themselves for posts on the work of Justice John Paul Stevens, who's served on the U.S. Supreme Court since 1975. Having had the privilege of clerking for the Justice in the Court's 1988-89 Term, I'm delighted to announce that on Friday, March 6, 2009, the University of California, Davis, School of Law, my home institution, will host a daylong conference entitled "The Honorable John Paul Stevens."
This Law Review symposium is a core component of our celebration of the 40th anniversary of the day that our law school building was dedicated as Martin Luther King, Jr. Hall, with Chief Justice Earl Warren presiding and members of Dr. King’s family participating.
The conference will begin with videotaped remarks from Justice Stevens. Thereafter an exciting 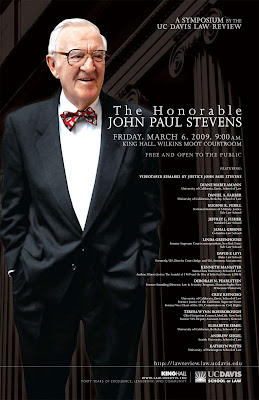 Details and registration (California MCLE available) -- and, following the conference, a webcast of the event -- may be found here.