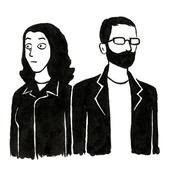 Since the revolution in 1979, when I've thought of Iran, I've thought of the color black: the black of oil, of religious garb, of violent repression. We've all read of Islamic women's "under cover" rebellion: under their veils, many wear sexy underwear or Western clothing, but the movie Persepolis (image at right) and my contact with Iranian friends and colleagues in Paris tended to confirm the black image, This report in Friday's Herald Tribune, by Nazila Fathi, provides a bright and heartening contrast. Fathi writes that the religious revolution led to an information revolution that is leading, slowly yet "inexorably," in the words of Janet Afary (below left) author of Sexual Politics in Modern Iran (2009) and professor of Middle East and women's studies at Purdue University, to a sexual revolution.
Remember that Iranian law provides for male supremacy: while men may be polygamous, forbid their wives from working and 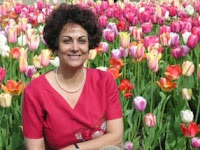 divorce them whenever their wish and take custody of any children older than 7, girls as young as 13 can be forced to marry, women inherit from their parents only half what their brothers' do, their word in court counts only half as much as a man's, refusal to cover one's hair can result in a jail term and 80 lashes and stoning is still the legally prescribed punishment for adultery. Despite these obstacles, women are uncovering their rebellion. For example, 1 in 5 marriages now ends in divorce as women from all socio-economic levels refuse to accept their unequal status, which often results in unabated domestic violence. After 1979, somewhat like the draft dodgers of the 1960s, women went to university to postpone, if not avoid, the restrictions of marriage, motherhood and low social status forced upon them by the religious revolution. And religious women who had previously shunned mixed university classrooms came to study once classes were segregated. Thus, in 1982, slightly more than 30% of students were women. Today, even though classrooms are no longer segregated, women make up over 60% of university students. And for those who cannot go to university, satellite TV and the internet have given Iranian women a glimpse of life as men's equals. And seeing is believing: being able to imagine a different reality is the first step to realizing it, and Iranian women and men are now openly questioning sex discrimination. In contrast to a popular movie

about a woman denied a divorce despite her husband's adultery, Mehrdad Oskouei (left) has won wide international acclaim for his documentary The Other Side of the Burka, which reveals the plight of women from poor, traditional families on the Iranian island of Qeshm, for whom divorce is no option: rather than go from bad with their husbands to worse with their fathers, these women are committing suicide in increasing numbers.
Yet the 1979 revolution instituted programs to improve literacy, health and infrastructure that have benefited women: sexual segregation meant building schools and universities just for girls and women; improved infrastructure and transportation brought rural and/or poor women to school and big cities, where they gained exposure to different ideas and lifestyles. Then in 1993, to control population growth, the state began requiring engaged couples to attend premarital sex education classes, which included information on birth control. Delayed pregnancies helped shift views about marriage: young people very quickly began to seek compatible partners with whom they could be intimate. Today, they are seeking equality. In 2005, inspired by a similar movement against misogynist laws in Morocco, the Campaign for One Million Signatures began circulating a petition calling for greater equality in the areas of marriage, divorce, adultery and polygamy. Almost 50 of the groups members have been jailed, 6 cannot leave the country and

their Iranian website has been blocked 18 times.
Perhaps a sign that, as women's rights advocates claim, differences are less pronounced between religious and secular women, the granddaughter of Ayatollah Ruhollah Khomeini, Zahra Eshraghi (left, photo credit), signed the Campaign's petition. As both secular and religious Iranian women have become more educated and traveled more -- even attending women's rights conferences -- they've found common ground in their desire for equality. Such news is certainly encouraging, as is the success of a group called Meydaan, whose web reports and videos on stonings embarrassed the government enough for the head of the judiciary to urge judges not to order stonings. Though the number of stonings has thus been reduced, Parliament has not outlawed them and they continue. And due to government backlash against the Campaign for a Million 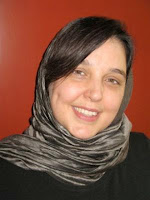 Signatures, collection of those signatures has slowed and is now conducted mostly on the web, as women avoid being seen with campaigners and signing this or any other petition.
Still, Sussan Tahmasebi (left) says she and other women's rights activists have made great strides. One of the Campaign's founding members and one of the 6 subject to a travel ban, Tahmaseb and other members of her group are facing security charges. For her, this is a great achievement: "No one is accusing us of talking against Islam. No one is afraid to talk about more rights for women anymore."
by Naomi Norberg at 6:02 AM