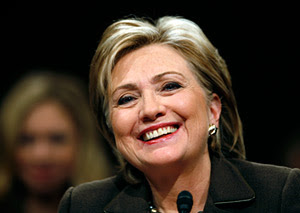 For many in the anti-trafficking advocacy community, President Barack Obama's election was a basis to hope for much-needed change in U.S. policy to combat cross-border trafficking in human beings. But statements by Hillary Clinton (left) during her hearings for confirmation as Secretary of State signal that change may not be as forthcoming as one might have expected, as a recent post by Columbia Law Professor Katherine M. Franke (below right) notes. Augmenting these concerns is the fact that key actors who influenced the Bush Administration anti-trafficking policy are now positioned to affect anti-trafficking policy in the United Nations. Those actors left a legacy, moreover:
► Over the last eight years, the complex issue of human trafficking has been grossly oversimplified into a campaign to rescue women from brothels (as IntLawGrrls blogger Dina Francesca Haynes has analyzed here). Notwithstanding a legal definition (developed during the Clinton Administration) that encompasses the trafficking of men, women, and children for both sexual and non-sexual purposes, Bush Administration policies largely focused on sex trafficking (a phenomenon often inaccurately equated with "sexual slavery," as IntLawGrrls blogger Karen E. Bravo has noted here) and prostitution. This was in no small part due to the highly effective, coordinated advocacy efforts of self-described "abolitionist" feminists and faith-based organizations to turn trafficking into a crusade against prostitution-writ-large.
► These efforts culminated in State Department model legislation (for adoption by other countries) that targets prostitution and grants restrictions that require non-governmental (and certain international) organizations applying for U.S. funds to sign an anti-prostitution pledge -- measures that are problematic as a matter of international law and constitutional law.
► The abolitionists most recently sought -- unsuccessfully -- to amend the Mann Act to expand federal criminal jurisdiction to cover all local and in-state prostitution cases, raising strong objections from women's and immigrants' rights groups, the DOJ, national associations of district attorneys, attorneys general, and fraternal order of police, and even the Heritage Foundation.
So, given Secretary Clinton's conflation of trafficking and prostitution in describing her plans to address sex trafficking during her confirmation hearing, one has to wonder whether she

will be willing or able to stand up to the same abolitionist pressures she once withstood during the negotiations over the U.N. Trafficking Protocol. After all, the Clinton Administration's refusal to adopt an abolitionist platform during the Protocol negotiations led then-First Lady Clinton -- as head of the President's Inter-Agency Council on Women -- to be viciously attacked by abolitionist feminists and conservatives for being "pro-prostitution."
On the international front, the appointment of the former President of Equality Now to head the New York office of the U.N. Office of the High Commissioner for Human Rights (OHCHR) raises the question of how much influence Equality Now's strong abolitionist stance will bring to bear on U.N. High Commissioner Navi Pillay (below left), who actually co-founded Equality Now. Until now, the OHCHR has stayed above the fray, hewing to the UN Trafficking Protocol's explicit guidance (in the official interpretive notes) that the legal treatment of prostitution be left to individual states to decide. Hopefully, High Commissioner Pillay will stay the course, if for no other reason than to avoid dividing the women's human rights community by taking sides in this fight.
So why the fuss? Whatever one thinks about the merits of prostitution/sex work, we cannot afford to have the limited resources devoted to anti-trafficking diverted to the broader issue of fighting prostitution, particularly given recent studies demonstrating the ineffectiveness of such campaigns and their potential for collateral damage. And the trafficking of men, women, and children for non-sexual purposes is a problem in desperate need of attention. Thankfully, the recently-passed 2008 William Wilberforce Trafficking Protection Reauthorization Act makes inroads towards addressing trafficking for non-sexual purposes, noting the "sense of Congress" that the Secretary of State should work with the ILO and UN to establish a multilateral framework between labor exporting and labor importing countries to ensure migrant worker protection. The 2008 TVPRA specifically addresses trafficking and exploitation of domestic workers by diplomats, a problem first exposed by Human Rights Watch nearly 8 years ago. Responding to problems identified by the GAO in this report, the 2008 TVPRA ensures that domestic workers are given an employment contract and made aware of their rights by US

consular officials trained in U.S. labor standards. It also requires the State Department to keep records of allegations of trafficking or abuse by diplomats, and to suspend issuance of visas to missions concerning which the State Department has received credible evidence of worker exploitation that was tolerated by the mission.
Marching orders in place, the task now is for the State Department to see these provisions through and -- hopefully -- not get enmeshed in the interminable prostitution debates.
by Janie Chuang at 9:00 AM

I'm really glad to see this article and to know about you. I'm Laura Agustín, author of a book that I hope some of you have read, Sex at the Margins: Migration, Labour Markets and the Rescue Industry. I've been studying migration since before the term trafficking was invented and have a blog you might find interesting. I like querying what we think 'the law' is!

The oversimplification here is the premise that at any work to end sex trafficking automatically diminishes or even obliterates critical work to end labor trafficking. Nothing is further from the truth. We desperately need resources and the intelligence to address both. However, just as it is critical to address the demand for cheap labor and goods, which fuels labor trafficking, one must address the demand for commercial sex and its profiteers when looking at sex trafficking. While not all prostitution is sex trafficking, prostitution is the end point of all sex trafficking. One cannot address this form of trafficking without addressing the sex industry's hold on the brutal exploitation of the most vulnerable human beings, whom we all agree should not be criminalized. The Wilberforce Act makes significant inroads for both labor and sex trafficking, but let's hope the Obama administration further strengthens tools to protect all victims and prosecute those we are desperately trying to target - human traffickers.

Thank you for your comments on my blog. Laura: I have learned a lot from your important contributions to scholarship in this area. Taina: yes, we certainly should address the brutal exploitation of the most vulnerable human beings and we certainly should target the traffickers. The question is, what practices should one target? To answer that question is to be very clear as to what constitutes exploitation arising to the level of trafficking. I'm curious -- in your view, where do you draw the line between prostitution and sex trafficking?

Pleased to make your acquaintance, Janie!