On this day in ...
... 1809 (200 years ago today), 2 men of lasting renown were born. 1st, in Shrewsbury, England, Charles Darwin (left) was born into a wealthy family -- his mother was from the Wedgwood porcelain clan, and his father was a doctor and financier. Interested in natural science from a young age, Darwin served from 1831 to 1836 "as naturalist aboard the H.M.S. Beagle on a British science expedition around the world." His discoveries, particularly those on the Galapagos Islands, led to his development of a theory of evolution and publication of the landmark The Origin of Species (1859). Here you can find Darwin's complete works online. 2d, on the same day, thousands of miles away, in rural Hardin County, Kentucky, Abraham Lincoln was born. His White House web bio quotes Lincoln's own account of his origins: 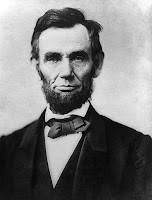 'My parents were both born in Virginia, of undistinguished families -- second families, perhaps I should say. My mother, who died in my tenth year, was of a family of the name of Hanks.... My father ... removed from Kentucky to ... Indiana, in my eighth year.... It was a wild region, with many bears and other wild animals still in the woods. There I grew up.... Of course when I came of age I did not know much. Still somehow, I could read, write, and cipher ... but that was all.'

He'd go on, of course, to become the 16th U.S. President, credited inter alia with vanquishing the Southern states' rebellion (at times using means that curtailed civil liberties, as we've posted here and here and here), issuing the Emancipation Proclamation, and commissioning the Lieber Code, a compilation of the laws and customs of war that influenced international instruments like the Geneva Conventions of 1949.
... 1909 (100 years ago today), in New York, the National Association for the Advancement of Colored People launched its 1st civil rights campaign. The date was no accident. A cofounder, Mary White Ovington (below right), wrote on the NAACP's 5th anniversary:

Of course, we wanted to do something at once that should move the country. It was January. Why not choose Lincoln's birthday, February 12, to open our campaign? We decided, therefore, that a wise, immediate action would be the issuing on Lincoln's birthday of a call for a national conference on the Negro question.

To publicize the decision, she wrote, organizers issued a call that began:

'The celebration of the Centennial of the birth of Abraham Lincoln, widespread and

grateful as it may be, will fail to justify itself if it takes no note of and makes no recognition of the colored men and women for whom the great Emancipator labored to assure freedom. Besides a day of rejoicing, Lincoln's birthday in 1909 should be one of taking stock of the nation's progress since 1865.
'How far has it lived up to the obligations imposed upon it by the Emancipation Proclamation? How far has it gone in assuring to each and every citizen, irrespective of color, the equality of opportunity and equality before the law, which underlie our American institutions and are guaranteed by the Constitution?'