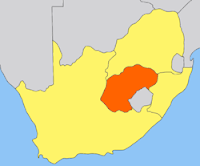 On this day in ...
... 1854 (155 years ago today), in what is now the Republic of South Africa, Britain recognized as independent the central area that within days became the Orange Free State (in orange at right). Conflicts with Britain persisted, however, and it lost independence in 1902.
... 1904 (105 years ago today), to quote National Public Radio,

an abandoned young woman took the stage at La Scala in Milan, Italy, praying for her lover's return. Thus, the world was introduced to Madame Butterfly, Giacomo Puccini's most famous heroine.

Pining was Cio-Cio-San, a Japanese woman who eventually would commit suicide on account of her abandonment by her husband, "a callous American officer, B.F. Pinkerton." The 3-act opera frequently has been adapted to film, and provided a basis both for the musical Miss Saigon (1989) and for the coyly titled play M. Butterfly (1988). (credit for Terrence McCarthy photo of San Francisco Opera production of Madame Butterfly)

(Prior February 17 posts here and here.)