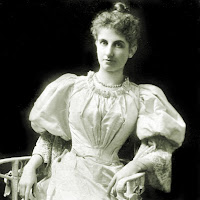 On this day in ...
... 1897, 23-year-old Clara Brett Martin (right) was called to the bar in Ontario, Canada. The 1st woman to receive a law degree from the University of Toronto thus became the 1st woman lawyer in the British Empire. The Toronto Telegram reported on her swearing-in as a barrister thusly:

She wore a black gown over a black dress and the regulation white tie and bore her honours modestly.

Both Martin's fearlessness and foibles are detailed here. (image credit)

... 1990, in a televised speech at Cape Town, South African President F.W. de Klerk rescinded a 3-decade-old ban on the African National Congress (logo at left), the country's "leading anti-apartheid group." De Klerk also suggested that he might some day release the group's imprisoned leader, Nelson Mandela -- as indeed he did 9 days later.
by Diane Marie Amann at 12:01 AM