On this day in ...
... 1895, an hour after he left the meeting of a women's rights group led by May Wright Sewall, Susan B. Anthony, and Anna Howard Shaw, 77-year-old abolitionist and suffragist Frederick Douglass collapsed and died at his home in Washington, D.C. The New York Times obituary said of the man depicted below left in a Rochester, New York, statue of him and Anthony at tea:

It is a singular fact, in connection with the death of Mr. Douglass, that the very last hours of his life were given in 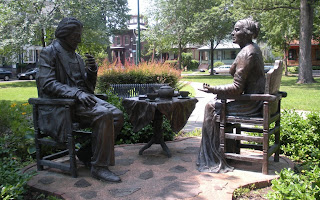 attention to one of the principles to which he has devoted his energies since his escape from slavery. This morning he drove into Washington from his residence, about a mile out from Anacostia, a suburb just across the eastern branch of the Potomac, and at 10 o'clock appeared at Metzerott Hall, where the Women's National Council is holding its triennial. Mr. Douglass was a regularly-enrolled member of the National Women's Suffrage Association, and had always attended its conventions.

... 2005, María Teresa Fernández de la Vega (right), Spain's Vice President, announced that 76% of the electorate had voted for the Constitutional Treaty of the European Union in the 1st referendum on the charter. The treaty faltered in other countries, however, and its successor, the Lisbon Treaty, likewise remains unratified, as IntLawGrrls posted.
(Prior February 20 posts are here and here.)
by Diane Marie Amann at 6:01 AM