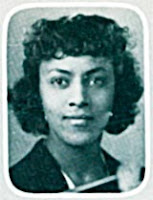 On this day in ...
... 1959, educator Ivy Lawrence Maynier (left) gave the 1st lecture in a series of 11 lectures. Born in 1921 in Montreal, Canada, of Trinidadian parents, she'd become, in 1945, the 1st woman of color to graduate from the University of Toronto law school -- and the 1st graduate ever to earn honors in international law. She practiced law in England and Trinidad, and then worked with the United States Information Service in Paris. Back in the West Indies, "she pursued her lifelong passion for adult education and developing courses, programs and lectures that would make university more accessible to dispossessed groups and communities...." She died in 1999. (photo credit)

... 1971, the Home Secretary announced Britain's new Immigration Bill, which would strip Commonwealth citizens of their automatic right to remain in the United Kingdom. As of the naxt New Year's Day, "Commonwealth immigrants will face the same restrictions as any other person applying to live and work in Britain"; that is," to be allowed to stay, they will have to produce a work permit relating to a specific job in a specific place." According to the BBC, "Representatives of immigrants in the UK say the new bill, designed to stem racial tensions, will serve only to increase them."