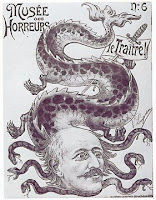 On this day in ...
... 1896, the 1st edition of a bimonthly periodical entitled Le Féminisme Chrétien (Christian Feminism) , appeared in France. The journal aimed "to disseminate feminist ideas in Christian milieus and Christian ideas in feminist milieus." The publisher was Marie Maugeret (1844-1928), who founded the Société des féministes chrétiennes the same year. Soon after, claiming the mantle of patriotism, she would agitate against Alfred Dreyfus, a military officer of Jewish heritage who was condemned to solitary confinement at the Devil's Island penal colony after being

wrongly convicted of espionage in a trial tainted by anti-Semitism. (credit for caricature from a different journal, depicting Dreyfus as a serpentine traitor)
... 1885, expanding its colonization efforts in East Africa, Germany "annexed" Tanganyika and Zanzibar, in the area now comprising the country at right, Tanzania. (map credit)
... 1944 (65 years ago today), U.S. Rep. Suzanna Kosmas (D-Fla.), elected to Congress last November, was born in Washington, D.C.

(Prior February 25 posts are here and here.)