On this day in...
... 2000, Tarja Kaarina Halonen was elected Finland’s President. Halonen (left), who had served as the country's Minister of Foreign Affairs since 1995, holds the top post to this day. Just this past Sunday, another woman became leader of a nearby country: Johanna Sigurdardottir is Prime Minister of Iceland. In the words of the BBC, Sigurdardottir (below right) "is the first openly lesbian head of government in Europe, if not the 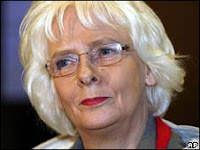 world -- at least in modern times."
... 1946, the judges of the League-of-Nations-founded Permanent Court of International Justice all having resigned 6 days earlier, elections were held for the 1st members of the International Court of Justice, during the 1st session of the U.N. General Assembly and Security Council.