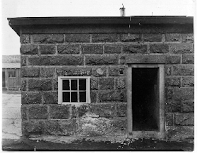 On this day in ...
... 1924 (85 years ago), "the gas chamber was used for the first time to execute a prisoner found guilty of a capital offense." The condemned man was Gee Jon, 29, who'd immigrated from China to Nevada, where he was convicted of murdering a rival gang member. The state's legislature,"[p]erhaps inspired by the use of poisonous gases during World War I," had authorized use of the method, in the "chamber" depicted at right. (photo credit) Since 1924, states have executed 11 persons by gas; the last was in Arizona in 1999.
... 1963, President John F. Kennedy imposed restrictions on travel to and from Cuba, thus expanding an embargo begun the previous year. Decades later, easing tense relations with the

United States' island neighbor to the south is an item on the agenda of President Barack Obama.
by Diane Marie Amann at 6:01 AM