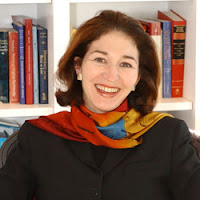 Kudos to our colleague Dr. Anne-Marie Slaughter (left), who's just completed her 3d week as the new Director of Policy Planning at the U.S. Department of State.
Slaughter had been serving as Dean of the Woodrow Wilson School of Public and International Affairs and the Bert G. Kerstetter '66 University Professor of Politics and International Affairs at Princeton University. (Prior IntLaw Grrls posts here and here.) Before that, she was the J. Sinclair Armstrong Professor of International, Foreign and Comparative Law and the Director of Graduate and International Legal Studies at Harvard Law School, and also taught at Harvard’s Kennedy School and the University of Chicago Law School. She served as President of the American Society of International Law from 2002 to 2004.
For hints at what State policies Slaughter might plan, take a look at her 2 most recent books, The Idea That Is America: Keeping Faith With Our Values in a Dangerous World (2008) and A New World Order (2004), and her 2008 comment in an ASIL feature on the Presidential race:

The most important question facing the next president is how to restore American respect for international law, in both perception and reality. Because of the dramatic rejection of international legal constraints in the first administration of George W. Bush, even fair-minded efforts to return to the rule of law in some areas in recent years has had little impact. The hardest legal issue, but one that simply must be addressed, is to agree on a set of interpretations of the Geneva Conventions, or perhaps even amendments, that define clearly what is permissible and impermissible in interrogating individuals suspected of terrorism who may have detailed knowledge about future attacks. The next task, which must be pursued simultaneously, is to revive and update the Non-Proliferation Treaty, with the full commitment of the United States to live up to our part of the bargain. Many other issues come to mind, but overall, the next President will have to decide on a menu of both symbolic and substantive acts and carry them out quickly and decisively. He or she will have to remind the American people, and convince the world, that the best safeguard of liberty is not force, but law.

Heartfelt congratulations!
by Diane Marie Amann at 1:18 AM