As we've discussed, Santa Clara University School of Law recently co-hosted a workshop with the International Committee of the Red Cross for law students interested in international humanitarian law. The various PowerPoint presentations delivered at that workshop have now been posted here.

The workshop culminated in a negotiation exercise involving a Working Group formed to generate a draft statute for a fictitious International Tribunal to Prosecute Acts of [International] Terrorism (ITPAT). Students were assigned to teams of 3-4 to represent the 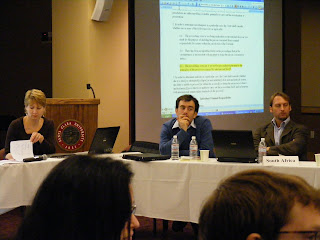 United States, the Philippines, Russia, Israel, Lebanon, the United Kingdom, South Africa, and other states with a particular interest in terrorism. Each team received a packet of materials on their “client” and its historical experience with, and legal approach to, terrorism. Like all diplomatic works-in-progress, the draft statutes itself was riven with brackets (even the title of the body remained contested). Students were charged with obtaining consensus on the open issues in formal and informal negotiations, whether multilateral or bilateral.
The key open issues were in many respects inter-related and reflect ongoing debates within the international law field:

► Students had to resolve whether the ITPAT would have jurisdiction over acts that would also implicate international humanitarian law, or the law of war. 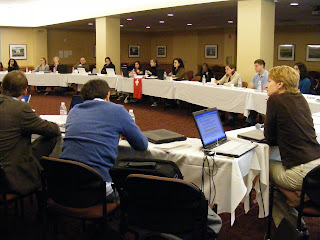 Draft language would have divested jurisdiction where the acts in question were committed within the context of an armed conflict, whether international or non-international. Alternative language enabled conduct to be simultaneously charged as war crimes and as acts of terrorism, where appropriate. In addition, this option proposed the creation of new international crimes of war, such as the crime of directly participating in hostilities (DPH). At the moment, the DPH doctrine is a feature of the principle of distinction and provides that individuals forfeit their protected civilian status when they directly participate in hostilities without the privilege of doing so. Such participation may render individuals subject to being targeted with military force, but it is not a war crime per se under contemporary IHL unless, e.g.,
Teams that opted to include war crimes within the ITPAT’s 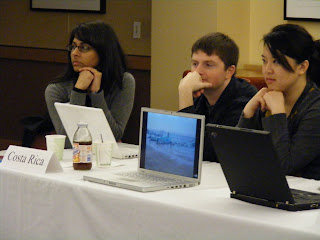 subject matter jurisdiction had to decide whether to require some sort of nexus to terrorism crimes or allow for the prosecution of stand-alone war crimes, risking overlap with the jurisdiction of the International Criminal Court.

► Students next had to grapple with how to define prosecutable crimes of terrorism. As I note in a recent article, the international community has defined terrorism in a piecemeal fashion; a consensus omnibus definition has remained elusive. Nonetheless, crimes of terrorism contain similar structural elements, and the 1999 International Convention for the Suppression of the Financing of Terrorism comes close to a global definition:

Any other act intended to cause death or serious bodily injury to a civilian, or to any other person not taking an active part in the hostilities in a situation of armed conflict, when the purpose of such act, by its nature or context, is to intimidate a population, or to compel a government or an international organization to do or to abstain from doing any act. Students had the option of incorporating only existing terrorism treaties, or trying to craft their own omnibus definition.


In addition to these questions of subject matter jurisdiction, teams were invited to weigh in on trigger mechanisms, preconditions for the 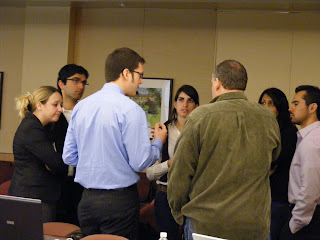 exercise of jurisdiction, the role of the Security Council in initiated or blocking prosecutions, and whether the ITPAT would be governed by principles of complementarity or primacy vis-à-vis domestic courts that may also have jurisdiction over the acts in question. These draft provisions were modeled roughly on the International Criminal Court Statute and draft iterations thereof.

Interestingly, students this year took an entirely different tack from last year. Last year, students almost unanimously agreed that the treaty should cover only acts of terrorism that occurred outside of a state of armed conflict. Under this approach, where the crimes had some nexus to an armed conflict, the ITPAT would have no jurisdiction. Last year's students also hesitated to assert international jurisdiction over acts of domestic terrorism.


By contrast, this year, students contemplated a tribunal with jurisdiction over war crimes in the traditional sense so long as they were connected with crimes of terrorism in terms of the purpose behind the attacks, the nature of the victims 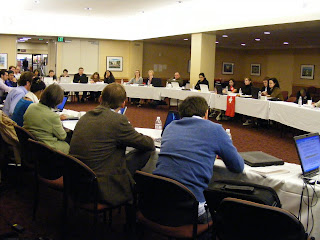 targeted, the pattern of the attacks (modus operandi), or the identity of the perpetrators. Participants favored language that would give a comprehensive tool set to the prosecution and fill holes in the existing international criminal law regime without creating redundancies or excessive overlap with the ICC, which does not assert jurisdiction over crimes of terrorism stricto sensu. Participants were also concerned that any ITPAT would necessarily adjudicate IHL in any case, as the Tribunal would have to decide whether the level of violence triggered the application of IHL. At the same time, while war crimes committed against so-called protected persons (like civilians or POWs) were easy to include in the proposed tribunal's subject matter jurisdiction, students grappled with how to precisely define crimes committed against combatants—both privileged and non-privileged. This group also favored the inclusion of both domestic and international terrorism, on the ground that the line between the two would be too difficult to draw in light of transnational terrorism networks and weapons markets.


In terms of the proposed Tribunal’s jurisdictional structure, students recommended adopting an express provision for self-referrals on the argument that there might be valid grounds for states to externalize the prosecution of crimes of terrorism — even purely domestic terrorism — committed in their midst. Where a state could in essence consent to jurisdiction, issues of complementarity less would be less pressing. They also suggested that the Security Council alone should be able to trigger cases involving state terrorism, on the idea that allowing state referrals for state terrorism would become too politicized.


At the moment, there is no movement toward an international tribunal for terrorism, although the Special Tribunal for Lebanon will assert jurisdiction over terrorism crimes as defined by Lebanese domestic law and the Rwanda and Sierra Leone Tribunals assert jurisdiction over the war crime of terrorizing civilians. The United Nations continues to work on a Comprehensive Convention against Terrorism. More on the United Nations’ efforts to combat terrorism can be found here.

The workshop is held annually and law students interested in international law and relations are encouraged to apply.
by Beth Van Schaack at 12:01 PM

That exercise is an excellent idea and very practical. This really helps law students see the issues on all side of the argument.