It was a pleasure to see so many Int’l L Grrls (and their readers) at the American Society of International Law Annual Meeting this weekend. A couple of us will be offering "reports" from the conference. Here, I’ll present a summary of one of the more eagerly awaited panels on “Closing Guantánamo: Legal and Policy Issues" chaired by 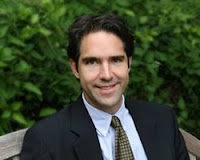 Bobby Chesney (Wake Forest). The panelists were David Glazier (Loyola of L.A.), Deborah Pearlstein (Princeton), Joanne Mariner (Human Rights Watch), and Glenn Sulmasy (U.S. Coast Guard Academy). A discussion of the crux of the problem of detention in non-international armed conflicts going forward will appear in a subsequent post. (Apologies if I jhave mischaracterized anyone’s position; clarifications welcome).
Chesney introduced the panel by describing the two executive-order task forces currently at work on detainee issues.
In the meantime, the administration has been forced to take positions (see post here) in habeas cases pending in federal courts (see post here).
Prof. Glazier (right) emphasized that the decision to close GTMO was the easy part; the “how” is where

the challenge lies. Glazier identified three potential outcomes:
Of the 240 or so detainees, about 60 men have already been cleared for release. In his estimation, about 80 individuals might still qualify as “high value,” but it is likely that most are minor functionaries along the lines of Salim Hamdan. Federal courts represent the only place to credibly prosecute individuals for whom there is sufficient evidence. Anything short of an Article III process will be perceived as a shortcut. Glazier raised concerns about the transfer paradigm: if the United States can’t fairly prosecute them here (for lack of admissible evidence or viable substantive charges), then it is unlikely other states could either. To transfer detainees for prosecution would put the detainees at risk of further detention without trial or of sham proceedings that might violate international human rights protections.
He acknowledged that some subset of detainees cannot be tried (because any evidence against them was obtained by torture or mistreatment, any crime for which they might be tried was enacted after they acted, or because there is simply no or inadequate evidence available against them) but remain dangerous. For this group, the U.S. should establish a preventive detention regime that is based on the law of war (to which GTMO doesn’t come close to complying). This paradigm must reflect the model of a communal camp setting with access to the outside world, etc.
Deborah Pearlstein (right) emphasized that the problem of what to do with GTMO is to a certain 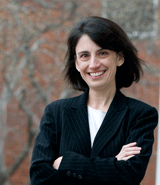 degree sui generis, because our options are informed and limited by what we’ve already done (which includes the commission of acts of torture, incommunicado detention, removal from battlefield, the failure to hold GC III Art. 5 hearings, etc.). For these individuals, there may be no good options available, so we’re left to sort through the “less bad” options. In so doing, we should attempt to do as little violence to international law as possible. This process of resolving GTMO should be cabined off from the larger problem of defining a detention process going forward; we can’t let the hard case of GTMO make permanent bad law or policy for the future.
Taking off on Glazier’s three categories of detainee, Pearlstein noted that the individuals slated for release represent a diplomatic, rather than a legal, problem. Many of these individuals may not be able to be sent home because of widely-shared treaty obligations under the Refugee or Torture Conventions. For those individuals who might have been prosecutable, there were more options available upon capture (courts martial, legitimate and lawful military commissions). Now, we’re left with federal courts as the only legitimate option.
For those who present security risks and might need to be further detained, the law of war may not provide any affirmative authority to detain individuals (either combatants or civilians who directly participated in hostilities) who were captured either in the context of a non-international armed conflict (NIAC) or outside of a conflict situation entirely (such as in Zambia). In addition, the Authorization to Use Military Force (AUMF) may not constitute sufficient domestic authority to detain these individuals. Thus, we would need express domestic authority in the form of new legislation to continue to detain them.
One positive outcome of the recent Obama administration filing beyond the welcome demise of the "enemy combatant" nomenclature is the good faith statement that the Administration intends to be in compliance with IHL. IHL quite clear and detailed on what detention authority exists in IACs. This, however, brings into sharp focus the need to look closely at the nature of the authority to continue to detain GTMO and other detainees given that the law governing NIAC provides no treaty-based authority to detain, on the presumption that domestic claw would provide the necessary authority outside of a state-to-state conflict where international law would be necessary.
Anticipating arguments by Commander Sulmasy, Pearlstein opposed the establishment of any separate national security court on the grounds that such a system won’t solve the GTMO problem and could never be established in time, given the legal challenges that would inevitably follow. She referenced a Human Rights First study demonstrating that the federal courts are sufficiently flexible to handle terrorism cases. 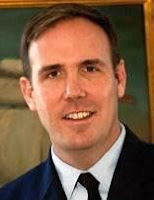 Commander Sulmasy (left) emphasized that even when we resolve the GTMO cases, there are hundreds of detainees at Bagram Air Base whose lawyers are also attempting to get into the U.S. court system. We still have not yet fully resolved the question of whether the situation with Al Qaeda is an armed conflict or a law enforcement problem or some hybrid of the two. The typical Al Qaeda member is part-international criminal, part-warrior.
Although he was thin on details, Commander Sulmasy advocated a hybrid national security court that would combine aspects of the military commission scheme as it was originally conceived (to dispense rapid justice) and Article III courts. (Sulmasy conceded that the military commissions, which should have begun trials in 2003, never achieved their intended purposes and that his support for the existing system eroded over time). This might involve proceedings that would be closed to the public (but not the detainee). This would not constitute preventative detention, as the process would be an adjudicative one rather than an adaptation of the Combatant Status Review tribunal system. Sulmasy questioned the ability of Article III courts to deal with terrorists and unprivileged combatants, noting that many of the terrorism cases reported on to date preceded 9-11.

Joanne Mariner (left) agreed that the immediate decision to close GTMO represented a meaningful break with the most reviled of the many unsavory Bush Administration policies. She was concerned, however, that some of the solutions being put forward are—and will be perceived to be—mere tinkering with the existing machinery. (She specifically noted the Obama Administration’s deliberate use of the term “refining” in its pronouncements). This, she emphasized, will not fool our European allies or the Muslim world for that matter, which may actually be the most important audience to convince that we’re genuinely changing our approach to fighting terrorism. In her estimation, we need the Muslim world’s support to fight terrorism effectively. In this regard, Mariner was disappointed in the most recent filing in the detainee litigation which, while it rejected the rhetoric of the Bush administration and laid to rest the controversial and unsupported term “enemy combatant”, resulted in only a slight modification to the Bush approach to preventative detention in practical effect.
With respect to the detainee categories, those who have been implicated in crimes should be prosecuted. The federal courts have already demonstrated that they are capable of this and may, indeed, have been overly harsh in certain terror cases (e.g., Padilla). The indictment of al Marri was an encouraging sign that President Obama has put some faith in the federal court system to deal with these cases.
Of the persons who cannot be tried and should be released, there is the concern that many of the GTMO conditions will be replicated overseas. Human Rights Watch researchers, for example, interviewed high government officials in Yemen, who implied that the Bush Administration had sought to create a proxy detention regime there with only a thin veneer of rehabilitation. In order to convince our allies in Europe to help us resettle these individuals, we’re going to have to set good faith example and accept some of these individuals into the United States. Immediately resettling the Uighurs, for example, would have jump started resettlement negotiations with Europe.
In terms of the problem of characterizing the current situation, Mariner noted that the Bush Administration capitalized on ambiguity between the formal war in Afghanistan and the so-called “global war on terror.” She noted that although NATO passed a resolution endorsing a military response to 9/11 (one that was focused on Afghanistan just as the AUMF), the UN Resolutions subsequent to the attacks all have Al Qaeda in mind and call for traditional law enforcement responses with no reference to war rhetoric. Indeed, Mariner noted that many of our closest allies have argued that applying a war paradigm to the global terrorism challenge is counter-productive and feeds into perception of the Muslim world that this is a war on Islam.
The rest of the panelists opposed Commander Sulmasy’s proposal for any sort of a national security court. Glazier acknowledged that terrorists have dual characteristics (criminal/warrior), but queried whether we need new law and institutions to bridge this gap. Depending on the circumstances, we can freely choose between existing bodies of law to respond to dangerous individuals, as long as we faithfully adhere to domestic and international legal standards. He is concerned that national security courts will inevitably involve departures from core due process protections that we hold dear out of mere expediency. Otherwise, why would we need them? He is also concerned that if we make arguments about why we need such courts based on the difficulty of invoking standard criminal law processes, it will be too easy to expand this “special” process to other “tough cases,” such as drug smugglers and organized crime members.
On the question of whether we need a more formal preventative detention regime, Pearlstein noted that many human rights organizations do not categorically oppose security detention. (Indeed, it is affirmatively authorized in the 4th Geneva Convention for non-combatants who post security risks). The question remains: is such a system sensible as a matter of US policy and counter-terrorism strategy? This requires a consideration of whom we are talking about preventively detaining. Where people are apprehended engaging in violent acts, they can be prosecuted for such crimes as providing material support for terrorism, even if the acts in question were committed extraterritorially. So, any preventative detention regime would likely be used for mere members of dangerous groups for whom there is insufficient evidence that they actually did anything. Detaining and thus incapacitating a marginally low-level and expendable Al Qaeda member will serve some minor specific deterrent effect. If we detain too many of his brethren, however, it might also risk radicalizing his inevitable replacements. The long-term strategic rationale for such a system is questionable.
by Beth Van Schaack at 11:38 PM