(Look On! takes occasional note of noteworthy films.) Yes, I know. The movie "Bamako" was made back in 2006, times have changes, and I'm 3 years too late in recommending it. However, I had the opportunity to watch and consider "Bamako" for the first time this weekend, and believe that its message(s) continue(s) to be timely.
In the film, global financial and economic institutions are put on trial in a traditional village. The lives of the villagers go on around the litigants. The film's powerful critiques of the global financial institutions continue to resonate today, highlighting as they do the contradictory effects of development "aid" on African countries. Populations of countries wealthy in resources continue to be poor -- in fact, according to the film's witnesses for the prosecution, the countries and their populations are now poorer than they had been 5 decades 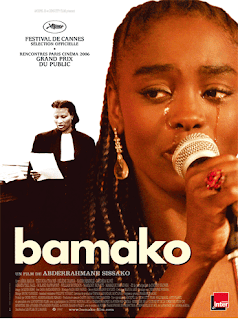 ago. The two sides clash over, among other questions, the issue of whether the fault lies with the individual countries' internal corruption and/or incompetence. What is the role of the policies stemming from the ministrations of the International Monetary Fund and the World Bank?
Already we are informed that Africa, although not fully integrated into the global economic and financial systems, is suffering the negative effects of the current worldwide crisis. U.K. Prime Minister, Gordon Brown, has suggested the restructuring and revision of the global economic and financial system. Consensus on this issue is not imminent and, should one emerge, it will be hard fought.
World leaders and negotiators: Consider "Bamako"!

And Bamako is not without some healthy humor, too. See Danny Glover spoofing Hollywood.

Another fine film exposing the problems of developmental trade is Darwin's Nightmare.

I found Bamaka a little easier to take away, as if we throw out the bad guys and make some structural changes justice and development can occur.

Darwin's Nightmare will leave you with no such comfort.