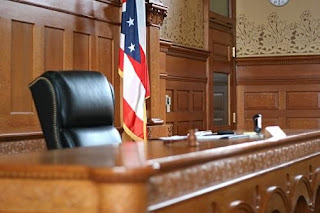 For the 3d time in a month The New York Times has disserved readers interested in matters pertaining to international or transnational criminal law.
1st there was the uncritical puff piece on the unprecedented anonymity of the newly sworn-in bench of the Special Tribunal for Lebanon.
Then there was the uncritical call for unilateral air strikes against Sudan, without any consideration of whether international law might forbid the United States or any state from engaging in such use of force.
And now there is yesterday's uncritical story on Spain and 6 Bush Administration lawyers.
This IntLawGrrl had decided the day before the Times story appeared to write nothing on this at this time, for the reason that a close read of the Spanish media on which the story is based revealed little more than a leak of a trial balloon -- a tentative signal that a criminal investigation might be opened respecting these lawyers' involvement in U.S. interrogation abuses post-9/11. Unless things have changed radically in 2 days, Spain seems far from indicting anyone. The New York Times nonetheless chose to publish the names and photographs (perhaps better described as mugshots, given the nature of the photos chosen) of all 6.
But it's not that choice that galls. What galls is the 1st clause of paragraph 23 of the Times 25-paragraph story:

The United States, however, would be expected to ignore an extradition request for former officials, ....

This declaration, made without attribution -- without even the feint of an unnamed source -- is legal nonsense.
Extradition is a treaty-based process by which 2 nation-states promise to hand over fugitives upon request; this statement of promise in the U.S.-U.K. Extradition Treaty is typical:

ARTICLE 1
Obligation to Extradite
The Parties agree to extradite to each other, pursuant to the provisions of this Treaty, persons sought by the authorities in the Requesting State for trial or punishment for extraditable offenses.

Not every request will result in extradition, however. Such treaties often are quite detailed, and conditions for extradition vary from treaty to treaty. I have been unable to locate the text of the original and supplementary U.S.-Spain extradition treaties online. Still, certain common restrictions might well be part of the U.S.-Spain framework. For instance:
► Double criminality: The offense for which the fugitive (called the "relator") is sought must have been, at the time it was allegedly committed, a felony under the laws of both countries.
► Specialty: If extradited, the relator may be tried in the requesting country only for offenses properly named in the extradition request.
► Political Offense: In some treaties, extradition will be blocked if the underlying offense is of a political nature.
► Double Jeopardy/Ne Bis in Idem: There will be no extradition if the relator already has been tried for the same offense.
► Hearing: The requested state typically will consider the relator's challenges to extradition, not only on factors like those above, but also on fundamental due process concerns, such as whether the person in custody is in fact the person sought for extradition, and whether the requesting state's statement of the bases for suspecting the relator of the stated offense is sufficient. In the United States such additional conditions are spelled out at Title 18, ch. 209 of the U.S. Code.
If the requesting state fails to meet all the requirements agreed upon in the extradition treaty and law, the requested state is fully justified in refusing the request.
Such a refusal, however, would fall far short of "ignoring" an extradition request, for it would have come after examination of the matter at hand; that is, only after the state had discharged its obligations under the extradition treaty to give due consideration both to its treaty partner's request for extradition and to the relator's challenges to same.
For the Times to suggest that the United States would do anything less evinces a lack of understanding about the law and casts innuendo where none is yet warranted.
by Diane Marie Amann at 6:02 AM

I strongly agree with your first two examples, but I think your criticism of the extradition comment is unfair. I followed closely the "debate" on extraditing the CIA agents to Italy to stand trial for Omar's kidnapping and extraordinary rendition. The US made it perfectly clear that they would never extradite the agents under any circumstances: as one NYT report put it, "American officials have stated blankly that they will never extradite the C.I.A. operatives." That is not a government saying that it will consider an extradition request and do whatever it can under the terms of the treaty to avoid extradition. That is a government saying it doesn't care about the treaty itself.

I note 1st that the NYT report as you quote it is not a direct quote from a named source -- which has been key to my commplaints all month. Even the Times' own Public Editor has taken on the paper for this recently. In a March 21 column available at http://www.nytimes.com/2009/03/22/opinion/22pubed.html?scp=3&sq=%22public%20editor%22%20source&st=cse, the editor decried use of unnamed sources in a host of unjustified circumstances. My favorite:

"[I]n an article about the decoration of New York apartment building lobbies, a woman was granted anonymity to describe a particularly edgy one as 'a den of hell.' She had been visiting a friend in the building and would not give her name, the article said, 'for fear of offending the hostess.'”

Now let's assume that American officials have indeed "stated blankly that they will never extradite the C.I.A. operatives." Putting to one said that this says nothing about the why of the matter, in any event, undercover CIA agents are far different from named government attorneys. The former almost never are made to appear even in U.S. courts, on ground of secrecy, no matter how persuasive a litigant's case for compelling their presence or testimony.

It should also go without saying that the extraterritorial litigation to which you refer -- which, as you know, was gutted earlier this month, on ground of secrecy, by Italy's highest court -- unfolded in a different U.S. administration. It remains to be seen what this administration will do. So far it has proceeded with care, on a case-by-case basis, and by executive order is still very much in a review status regarding post-9/11 matters. Thus one may presume too much in assuming how this administration would handle a proper extradition request made in a particular case -- a case that by all accounts so far would look markedly different from that of CIA agents in the Italian case. (Double criminality, particularly if interpreted to require duplicative standards of individual criminal liability, seems at 1st blush to loom as a formidable hurdle in this imagined case.) Surely it is not good journalism to declare what would be "expected" of this administration in a highly speculative situation -- respecting "a leak of a trial balloon" -- without bothering to name the source of that declaration, nor even to attribute the declaration to some unnamed source.