Go On! So Many Conferences ... So Little Time

(Go On! is an occasional item on symposia of interest) In addition to the ASIL annual meeting that Diane previews above, two noteworthy conferences, both set for Friday, April 3, 2009, are fast approaching:
Reproductive and Sexual Health and the African Women's Protocol
Washington and Lee University School of Law, Lexington, Virginia
Description:

The African Women's Protocol, adopted by the African Union in 2003 and in effect in 2005, is the first regional human rights instrument to focus comprehensively on women's rights. The symposium will serve as a discussion of the Protocol's utility at the intersection of reprodu 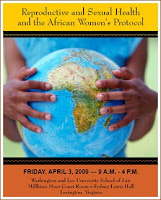 ctive/sexual health and women's rights, both quintessentially unmet needs of the African continent.
The HIV/AIDS pandemic, lack of access to contraception, harmful cultural practices, sexual violence and exploitation, deteriorating access to health services, and abortion will be among the topics of Symposium papers.
Washington and Lee's 2008-09 Scholar-in-Residence, Charles Ngwena, Professor of Health and Human Rights at the University of the Free State, South Africa, will chair the symposium, bringing together prominent scholars from Africa, Asia, Canada and the United States.

New England Law Boston will sponsor an international conference on April 3 entitled 'CEDAW and Its Optional Protocol.' Cosponsored by the American Society of International Law (ASIL), the conference will recognize the tenth anniversary of the adoption of the Optional Protocol to the Convention on the Elimination of All Forms of Discrimination Against Women (CEDAW); examine work undertaken as a result, and discuss ways of increasing its effectiveness.
Members of the CEDAW Committee who will participate include Shanthi Dairiam, Pramila Patten, Cornelius Flinterman, and Silvia Pimentel. The United Nations High Commissioner for Human Rights will be represented by Jane Connors, director of the

Human Rights Treaties Branch of the High Commissioner's Office. The conference will consist of several panels examining challenges to the effective implementation of the Convention, the issue of United States ratification, and the jurisprudence of the Committee, including comparative analyses of the work of other treaty-bodies and regional human rights institutions.