My almost-five year old, Oz, has long coveted having a gun of some sort (he loves playing a wide range of complex super hero battle games with his friends), and we've long had a strict anti-gun policy in the house. So, with his birthday coming up, I've decided to compromise a bit in order to avoid making guns too interesting 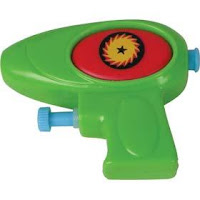 and mysterious, and get him a set of water guns that don't look like guns. In the process of this, we got into a conversation about why dad and I aren't such big fans of guns that led to my reflecting about some of the international law dialogues about armed conflict and human rights.
When I asked Oz why dad and I aren't such big fans of guns, he opined that having guns around makes kids used to having guns and that this wasn't such a good idea. He then asked me why kids are allowed to have toy weapons at all if having them around makes them get used to them. I told him that I agreed with his concern and thought that this was a good reason for kids not to have them.
But the conversation wasn't quite over. Oz then reflected that the reason we needed guns was that if people could only fight with their hands, wars would never end. We've since probed this reflection quite a bit with Oz, including with some colleagues last night, and he remains quite convinced of this point. He thinks that weapons help end wars faster despite various efforts to suggest that maybe people could decide to stop fighting even if they only had their bodies to fight with.
Since then, beyond reflecting on how much grownups can learn from kids and how interesting their ideas are, I've been thinking about the armed conflicts that have been so defining over my lifetime. I grew up with kids who had parents fighting in Vietnam (my dad would spend weekends at Fort Riley then, but was never actively in combat). I've spent a lot of time over the past several years concerned with resource wars and genocides. And, of course, there's the ever-present conflicts in Iraq and Afghanistan.
Despite working on the human rights aspects of oil in Nigeria, the claim against Karadzic, as well as several years of teaching international law in which we would do a simulation exploring whether the Iraq invasion was justifiable under the U.N. Charter, I still struggle with how law can play a constructive role in ending violence. Although I'd like to disagree with Oz and think we could just get rid of weapons and end war, and I certainly don't think a lack of them exacerbates things, I wish I had more clarity on how we could achieve meaningful progress on making the world a bit safer and more humane. In the meantime, I plan to remain strict about my kids having guns.
P.S. Oz gave me permission to tell this story.