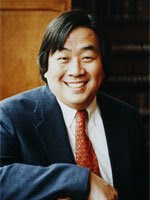 President Barack Obama has nominated our colleague Harold Hongju Koh (right) to be the next Legal Adviser at the U.S. State Department.
If approved by the Senate, Koh would succeed John B. Bellinger III, who for the last several years has held the top post at "L," as insiders call State's legal department.
A White House press release issued yesterday noted Koh's many achievements, highlights of which we now detail:
► "Dean and Gerard C. & Bernice Latrobe Smith Professor of International Law at Yale Law School' -- indeed, he is 1 of the IntLawDeans whom we've noted in past posts.
► "Assistant Secretary of State for Democracy, Human Rights and Labor" (1998-2001), plus prior service "on the Secretary of State's Advisory Committee on Public International Law."
► Former law clerk to Judge Malcolm Richard Wilkey of the U.S. Court of Appeals for the District of Columbia Circuit and to Supreme Court Justice Harry Blackmun.
► Former Attorney-Adviser, Office of Legal Counsel, Department of Justice.
The list goes on, yet omits important qualifications:
Koh, whose devotion to rights and law is made evident in Storming the Court (2005), a book about litigation that led to the Supreme Court's 1st, and pre-9/11, Guantánamo decision in Sale v. Haitian Centers Council (1993), has been an inspiring colleague and mentor, role model and friend to many of us in the intlaw community.
Heartfelt congratulations!
by Diane Marie Amann at 6:03 AM