New Report on Victim Participation at the ICC 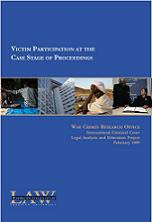 decisions pertaining to victim participation at the case stage.
Despite the wealth of expert analysis on the issue of victim participation -- both inside the Court and out -- there remains little clarity as to the purpose of the scheme or how it should operate. In part, the lack of clarity stems from the fact that Article 68(3) of the Rome Statute, which constitutes the foundational provision for victim participation before the Court, leaves a great deal of discretion to the Chambers to determine how and when victims will be permitted to exercise their right to present their views and concerns to the Court. Nevertheless, more than three years after Pre-Trial Chamber I’s first decision addressing the scope of victim participation, confusion remains as to the purpose of the scheme and how it should operate.
Only a fraction of the victims who have applied to participate in proceedings before the Court have received a response to their requests, and many of those who have had their applications evaluated have had to wait many months or years to learn whether their applications were denied or granted. At the same time, the participation rights granted to victims remain largely potential participation rights, as the Chambers have for the most part held that any victim wishing to exercise any form of participation must apply to the Chamber for permission and that such applications will be evaluated on a ‘case-by-case’ basis. Another issue addressed in the report is that the judges of the Court have adopted differing approaches toward the implementation of the scheme, resulting in victims in some cases having less extensive rights than victims in other cases.
The goal of the report is to contribute to the ongoing effort to render the victim participation scheme meaningful by identifying certain aspects of the scheme as implemented thus far that might benefit from review and offering recommendations consistent with the intent of the drafters that created the scheme.
The report is available here.
by Susana SáCouto at 10:00 PM

Kudos to the WCRO for taking on this confusing, yet important, topic!